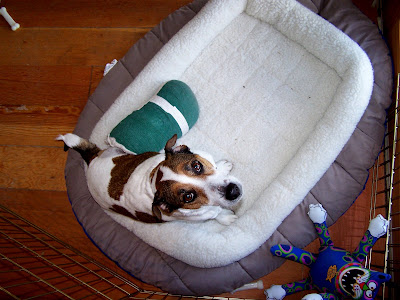 A day to celebrate at the ranch...the Prevention of Farm Animal Cruelty Act WILL be on the ballot this year! Over 800,000 signatures were collected- over 150,000 more than necessary to make the ballot...now the focus will be on prompting people to vote YES...more on the measure at the bottom. Paco and Luigi plan on helping remind people to vote...they have some ideas...in other news, the canine patient started chewing his cast today! It is a good thing that it comes off this friday...he's starting to get really tired of it, and of being confined to the deck- although he has the company of his brothers there, so it can't be that bad!

Isabella waits at the front door. 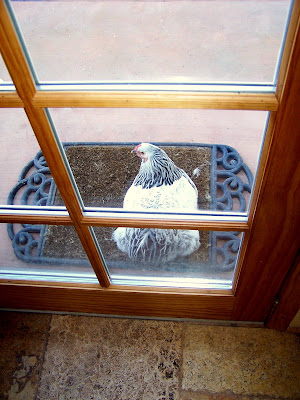 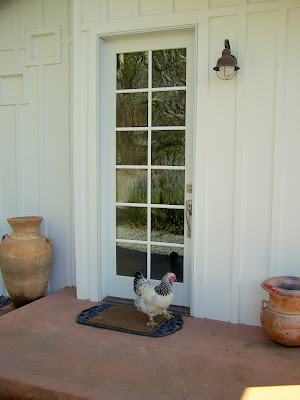 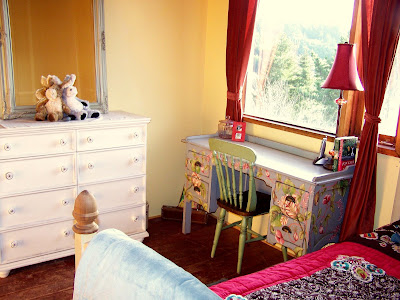 The recently cleaned and redecorated upstairs...note the donkey stuffed animals on the dresser! 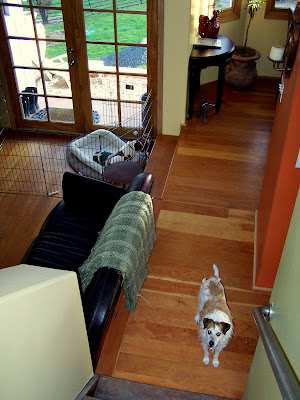 Toby thinks I have his ball. 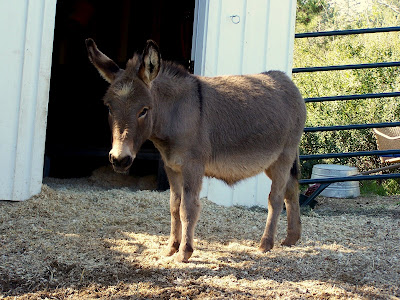 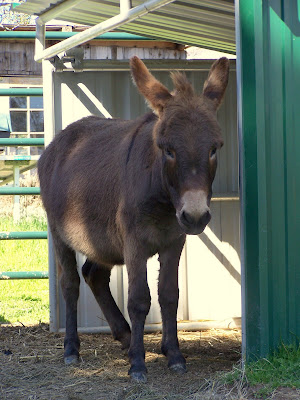 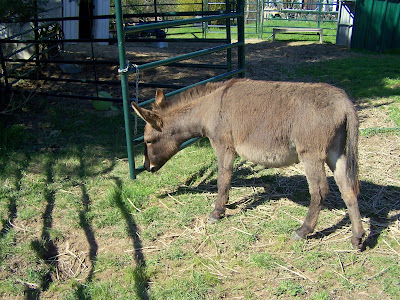 This is hilarious- I discovered something that Paco does and I think he thinks it is a game: he pulls the gate forward with his mouth and then lets it go...and then repeats. I watched him do this for five minutes! 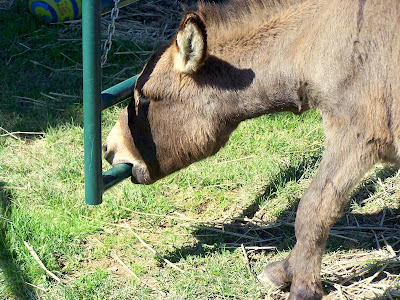 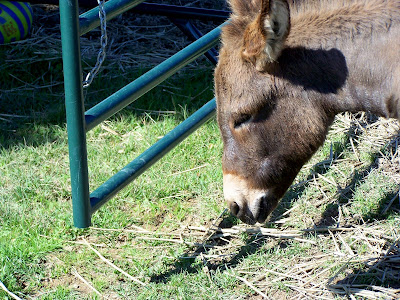 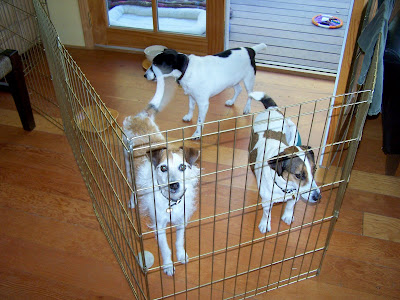 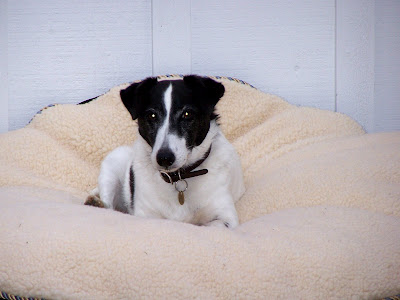 As long as Solo gets the nice bed, he doesn't mind being confined! 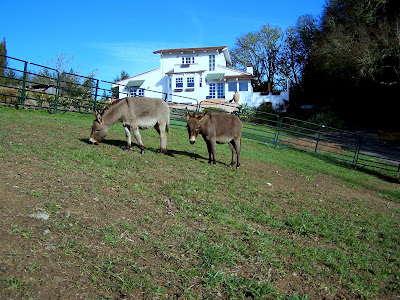 Beautiful day for the equine. 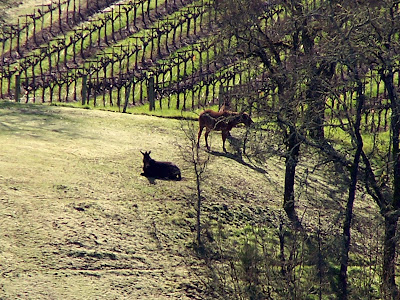 Horse across the way naps. 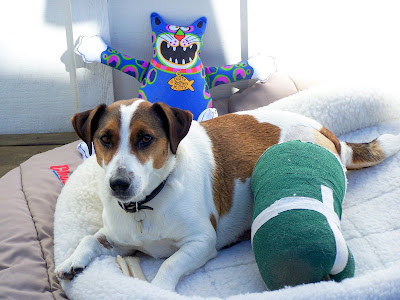 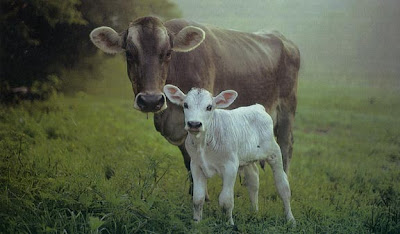 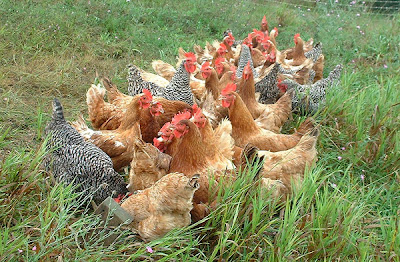 What will this measure do?

The Prevention of Farm Animal Cruelty Act
provides the most basic protection to farm animals: merely allowing them to turn around and extend their limbs. It's hard to imagine a more moderate initiative. The purpose of the measure is to prevent three of the most cruel and inhumane forms of extreme confinement in the world of animal agribusiness: veal crates, battery cages, and gestation crates. All three of these practices have already been legislated against in the European Union.
What are veal crates? In order to produce veal, calves who would normally still be nursing are taken from their mothers. For the four months before they're slaughtered, the calves are typically tethered by their necks in crates too narrow for them to turn around or even lie down in comfortably. Prevented from engaging in their natural behaviors or from satisfying basic psychological needs, calves crated for veal suffer immensely. Not only has the American Veal Association now recommended that the industry phase out the confinement of calves in veal crates, but the largest veal producer is ending its use of veal crates. The company's CEO asserts that veal crates are "inhumane and archaic practices that do nothing more than subject a calf to stress, fear, physical harm and pain."
What are battery cages? California has approximately 19 million egg-laying hens. The vast majority of them are confined in barren battery cages that are so small they can barely move. In fact, each caged hen has less space than a sheet of letter-sized paper on which to live for more than a year before she is slaughtered. The birds can't even spread their wings, let alone nest, dust bathe, perch, or walk. They endure lives filled with suffering. Poultry scientist Dr. Ian Duncan states unequivocally: "Battery cages for laying hens have been shown (by me and others) to cause extreme frustration, particularly when the hen wants to lay an egg. Battery cages are being phased out in Europe and other more humane husbandry systems are being developed." How will egg-laying hens be housed if they must be able to turn around and fully extend their limbs? Cage-free housing usually provides hens 200-300 percent more space per bird. The animals are able to walk, spread their wings, and lay their eggs in nests—all behaviors permanently denied to hens confined in battery cages. Several California egg producers already operate cage-free egg farms.
What are gestation crates? During their four-month pregnancies, nearly 20,000 female breeding pigs in California are confined in barren gestation crates—individual metal stalls only two feet wide. The crates are so small that the animals cannot even turn around. Barely able to move, the pigs develop crippling joint disorders and lameness. Renowned farm animal expert Dr. Temple Grandin agrees that gestation crates are problematic, stating that, "Basically, you're asking a sow to live in an airline seat. . . . I think it's something that needs to be phased out."
Posted by Diana at 5:12 PM