Coyotes!! Geese!! And Saving a Dog in Distress...all at the Ranch on a Friday! 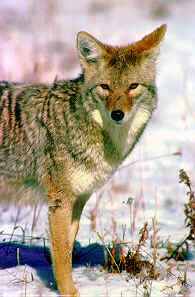 TWO coyotes visited the ranch this morning- a first and hopefully last visit!! I had let the hens out and was doing some ranch chores and then went into the house around 8 a.m. And then I looked outside- and saw what I thought at first were two REALLY big foxes...and then I thought they were strange dogs- they were right outside near the terrace and one of them looked right at me! They were pretty amazing looking- and very big & healthy looking, too. I ran outside to chase them off (without my camera- I need to just fasten it permanently on me!) and was really worried about "the girls"...the coyotes took off on the hillside to the side of us. Randy was in the shower while all this was going on...and five minutes later, I spot geese in the donkey pasture- these are "my" geese that I am constantly trying to snap a decent photo of! So this time I did grab my camera before rushing out the door.
I was pretty concerned about the coyote sighting, especially so close to the house- but after some online research, I found that both coyotes and foxes have their babies in April and that they tend to be out hunting more during the day then to get food for their young. I think the donkeys will be fine but I worry about the hens, of course, and Boulder and even the dogs, when they are loose (except for leash-bound Bravo). Anyway, I had never seen a coyote up so close and it was really an honor- now if they just stay away! And in other ranch news- I'll try to be brief- I "saved" a dog in distress today. I went to the video store at lunch and saw a poodle in a BMW that was obviously overheated- two windows were just down a crack and the poodle was frantically panting away. I told myself that the owner probably just dashed into the video store- so after picking out my DVD I asked the store owner to announce it- and nobody in the store owned the poodle. SOOOOOOOOO...I ended up for the next twenty minutes going into all the stores up and down the street asking if anyone had a BMW with a poodle in it- and finally I located the owner eating lunch at the King Hwa restaurant!! I couldn't believe it. I was polite as I could be when I informed the man that his dog appeared to be in distress in his car. He came out and very curtly thanked me (he was eating lunch with his wife) and then walked to the car. He'd thought I had left, but I watched from afar to see if he was going to handle the situation- and I was shocked to see that he opened the car door, peeked in at the poor dog for about two seconds and then closed the door without doing a thing!! SOOOOOO...I followed him back to the restaurant and asked if he was going to open the car windows or take the dog out of the hot car, at which point he told me that I had "done my good duty and my good deed for the day" and to "mind my own business". I told him that I would call the Humane Society and Animal Control, and I went back to my car to do just that. As I was on the phone with a woman from the Humane Society, the man came back to the car with his wife behind him holding a To-Go bag with their food- he glared at me, got into the car (still without rolling down the windows) and drove off. The Humane Society lady said I did absolutely the correct thing and told me that it is now against the law to keep a dog in the car (since 2006 in Calif.) if it is too hot or if the animal looks in any way in distress!! So I don't regret my actions. I am stunned that anyone owning a dog would treat it that way, though- total ignorance, I guess. And that's about it for life at the ranch today!


Photo (not taken by me!) of coyote, above...and here's a fox, below- you can see some differences. 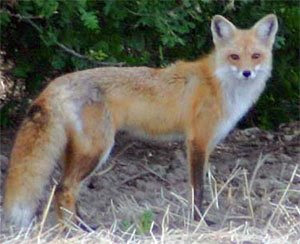 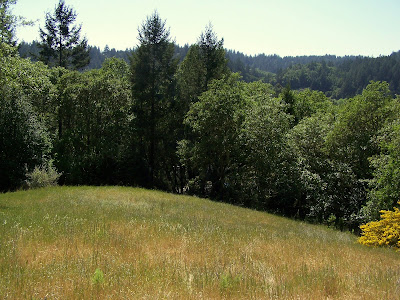 The hillside that the coyotes took off to. 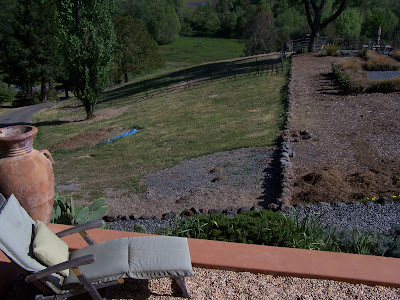 The blue tarp is where I spotted the coyotes!!! 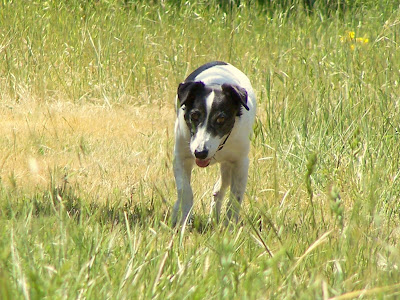 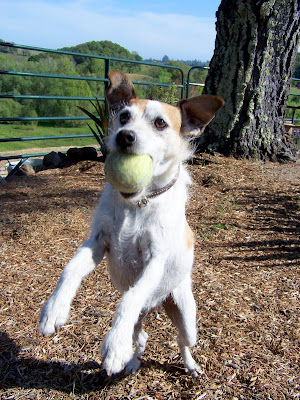 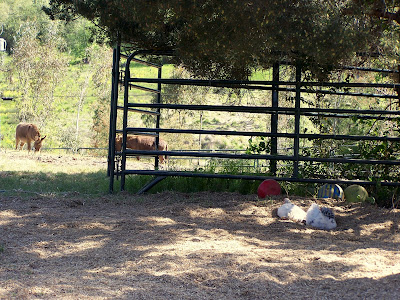 The girls love to hang out with the donkeys. 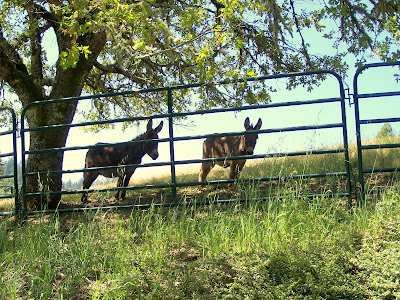 What I see when I come up the drive, and the donkeys spot the geese. 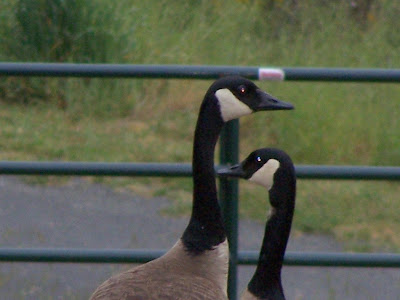 I LOVE the geese! 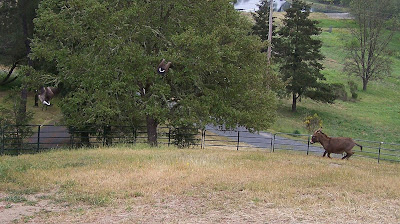 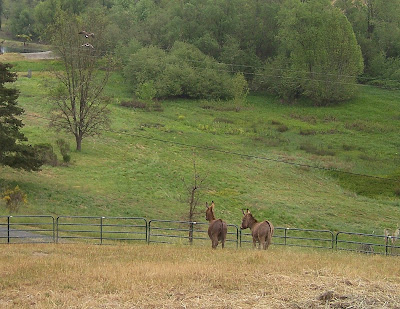 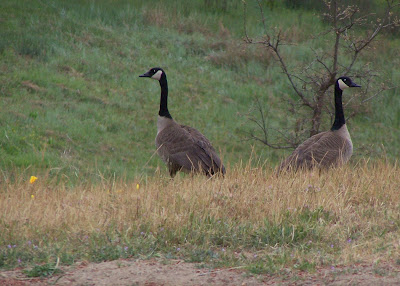 Paco chases them off, above. 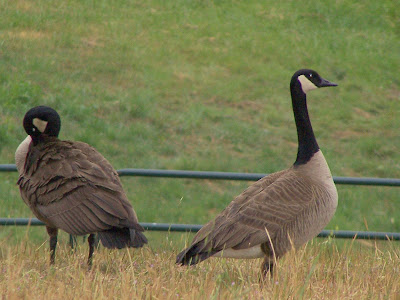 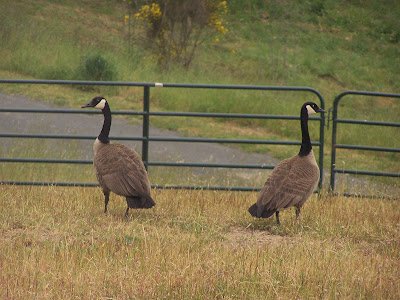 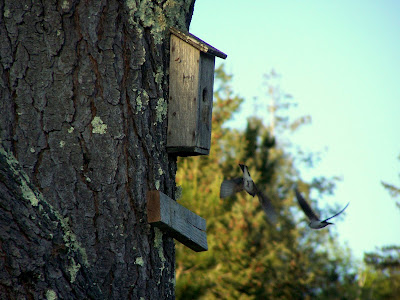 Swallows have started a nest. 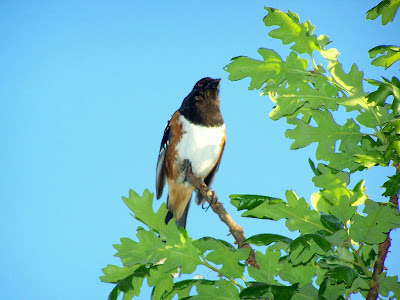 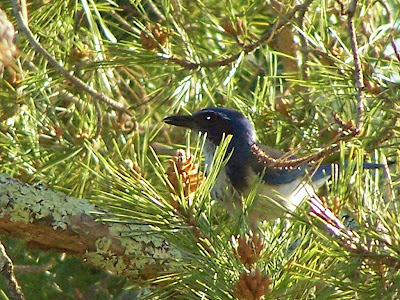 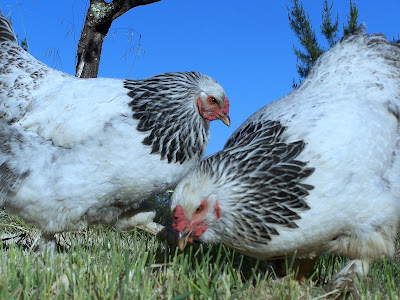