The Garden is Getting There Thanks to Farmer Randy! 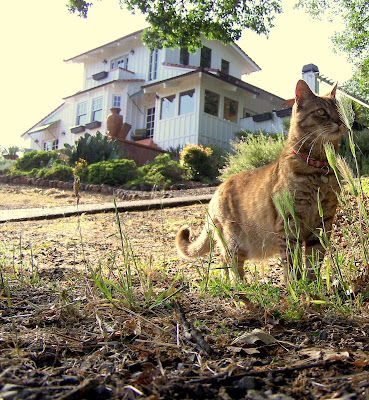 Another beautiful day at the ranch/farm (still name searching!)...Randy bought artichoke plants and more seedless grapes today for the garden...next will be lettuce...soon we'll be living off our own food! Bravo likes hanging out in the garden because we can close the gate and take his leash off for some much-appreciated "leash-free" time. Next week I see the vet again and I'll ask when Bravo can finally go off the leash...it is getting old for everyone! 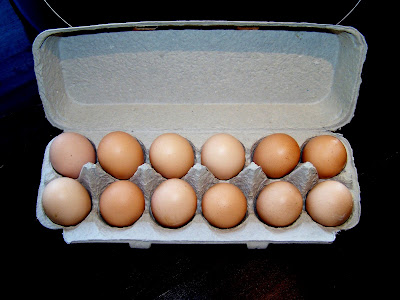 The girls have been busy lately! I might give these to the neighbors as a thank-you for "letting" Sophia and Isabella roam around their property! 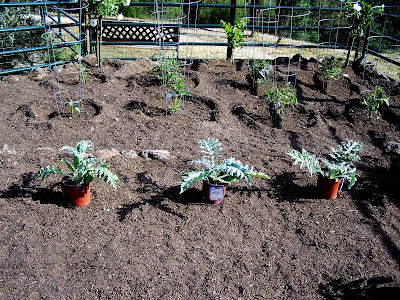 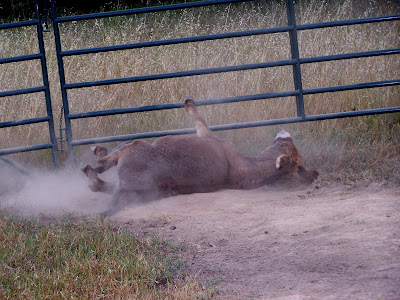 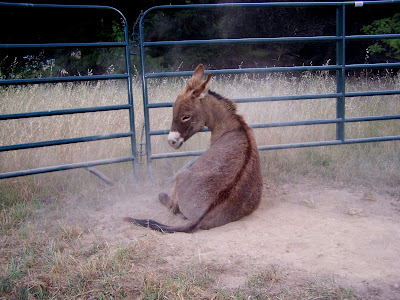 The girls dine on corn and avocado. 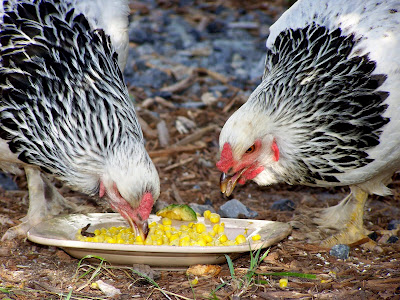 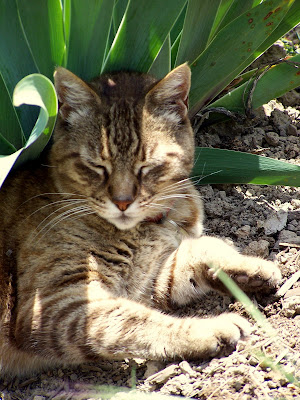 Bravo off leash in the garden! 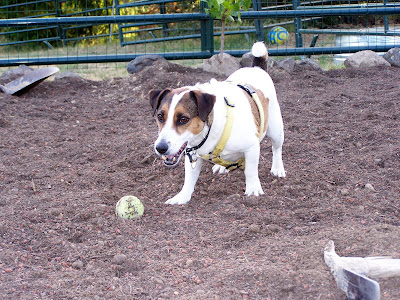 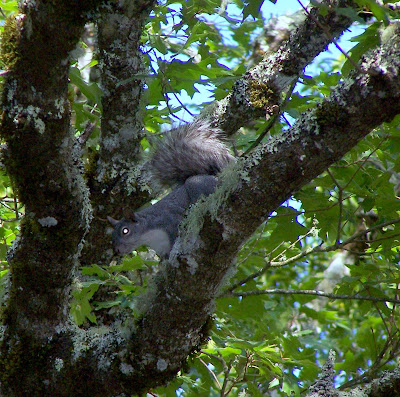 Solo in the garden. 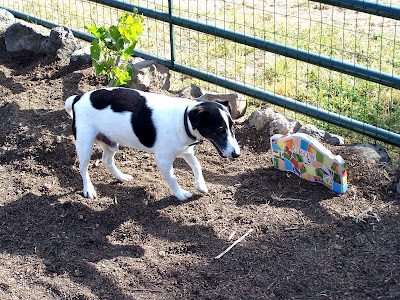 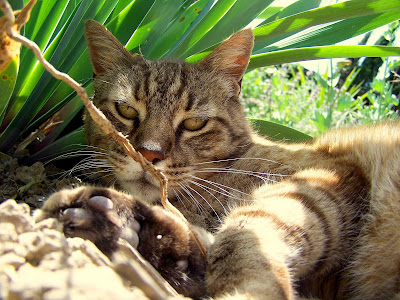 And the donkeys taking naps while standing up! 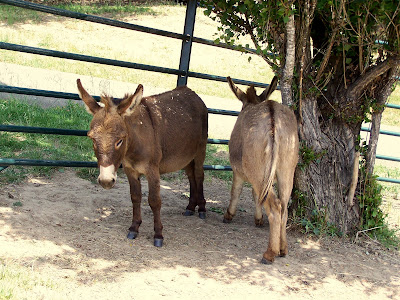 There's a reason they're called long-ears!

One of Boulder's favorite napping spots. 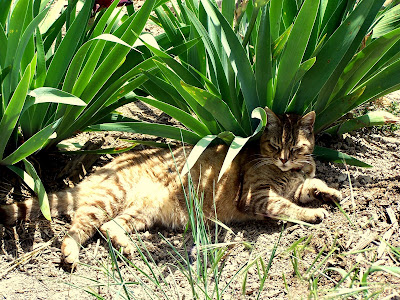 Boulder with the hens. 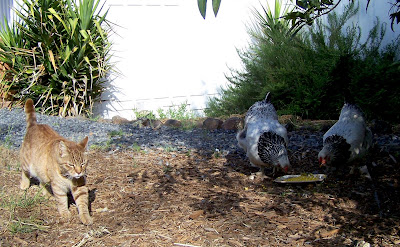 This is pretty interesting...

New Swiss Animal Law It is a world in which the goldfish are never lonely, the dogs are always obedient and the guinea-pigs are never tormented by children.
Under a new Swiss law enshrining rights for animals, dog owners will require a qualification, anglers will take lessons in compassion and horses will go only in twos.
From guinea-pigs to budgerigars, any animal classified as a “social species” will be a victim of abuse if it does not cohabit, or at least have contact, with others of its own kind.
The new regulation stipulates that aquariums for pet fish should not be transparent on all sides and that owners must make sure that the natural cycle of day and night is maintained in terms of light. Goldfish are considered social animals, or Gruppentiere in German.
The creator of this animal Utopia is the Swiss federal parliament, the Bundesrat, which adopted a law this week extending to four legs the kind of rights usually reserved for two. The law, which comes into force from September 1, is particularly strict over dogs: prospective owners will have to pay for and complete a two-part course — a theory section on the needs and wishes of the animal, and a practice section, where students will be instructed in how to walk their dog and react to various situations that might arise during the process. The details of the courses are yet to be fixed, but they are likely to comprise about five theory lessons and at least five sessions “in the field”.
The law extends to unlikely regions of the animal kingdom.
Anglers will also be required to complete a course on catching fish humanely, with the Government citing studies indicating that fish can suffer too.
The regulations will affect farmers, who will no longer be allowed to tether horses, sheep and goats, nor keep pigs and cows in areas with hard floors.
The legislation even mentions the appropriate keeping of rhinoceroses, although it was not clear immediately how many, if any, were being kept as pets in Switzerland.
Animal protection groups have greeted the news enthusiastically, but critics say that it means an extra financial burden on taxpayers and animal owners, and that it will be impossible to monitor the implementation of the rules. Farmers’ associations have protested, arguing that the law will have a negative effect on the economy and decrease their competitiveness on the international market.
One tabloid newspaper has accused the Government of pandering to the needs of guinea-pigs while ignoring more important animal issues, such as its failure to enforce a ban on dangerous dogs.
But Hans Wyss, head of the Swiss Federal Veterinary Office, said: “The aim is not only to ensure treatment of animals appropriate to each species, but also to decrease the risk of attacks by dangerous dogs. Inappropriate treatment could lead to behavioural disorders.”
Doris Leuthard, the Economics Minister, assured pet owners that the authorities would not be visiting people’s homes to enforce the law — although in extreme cases officials would have the power to intervene — but would count on the results of the training and a positive response from an “informed population”.
“We do not want to create a surveillance state,” Mrs Leuthard said. She added that, in an age of consumer concern for animal welfare, farmers would benefit from the new law.
The attitude of the Government is in sharp contrast to some alleged practices in Switzerland: activists campaigning for a ban of the production and trade in cat fur products claim that tens of thousands of cats are killed each year to satisfy a growing domestic and foreign market fuelled by the belief that cat fur can alleviate the pain of rheumatism.
The cats are skinned by specialised tanneries for various products, ranging from £30 for a single fur to £200 for a cardigan and more than £800 for a large blanket — which might explain the total absence of stray cats in the country. There have also been reports coming from France about cats disappearing from areas along the Swiss border.
Should pet owners require advance guidance as to what will be expected of them, a goverment website provides it. One entry reads: “Guinea-pigs are very sensitive social animals. They are interesting to look at, but not at all appropriate to be cuddled or carried around by children.”
And a word of warning for those planning a mercy killing for their goldfish: special chemicals will be required “to put them to death”.
Flushing them down the loo is no longer an option.
Posted by Diana at 12:37 PM