Solo's Teeth Cleaning Turns Out to Be Major Surgery! 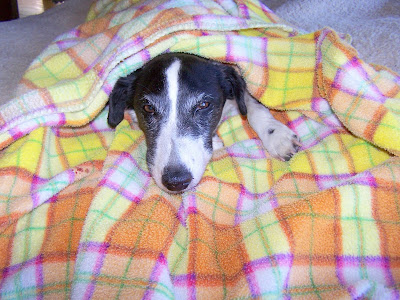 What a day for poor Solo...I dropped him off at the vet in the morning for what I thought would be a normal teeth cleaning (although I knew it was way overdue)...it turned out to be a three-hour surgery with 17 teeth extracted- I am still in shock! Half of the teeth in his mouth were removed. I knew his teeth were pretty bad, but even the vet was surprised at this. He's on painkillers and seems happy to be home but is pretty out of it still. The vet said he should be able to get along fine on the remaining teeth. Poor guy!!!!!! I feel really bad. Plus it was very, very expensive...so I guess the bottom line is sometimes it pays to do some PREVENTIVE dentistry first!! 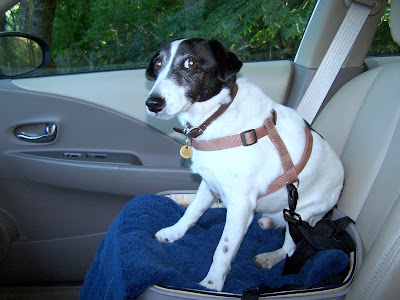 On the way to the vet...what a trooper. 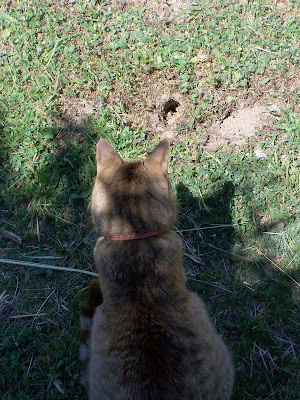 Boulder waited for the longest time today by a mouse hole. 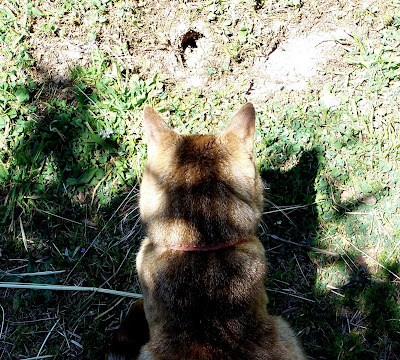 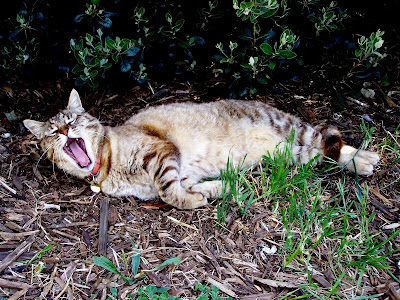 He even napped right by it! 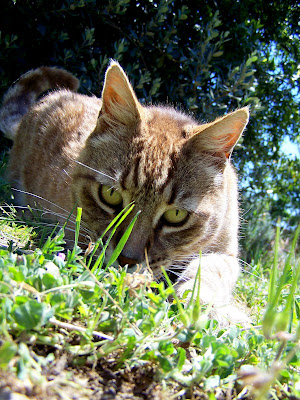 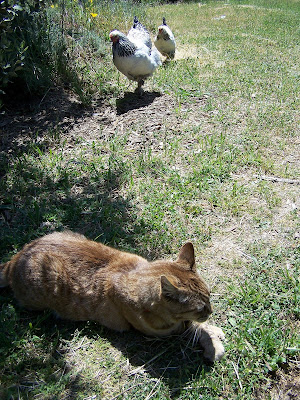 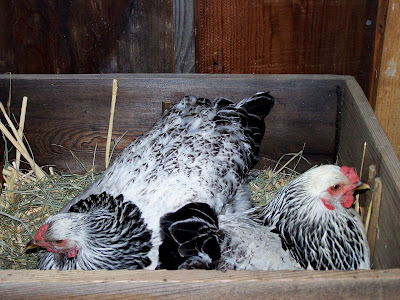 The girls lay their eggs. 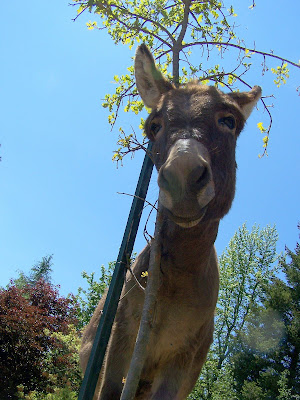 Paco and the little oak tree. 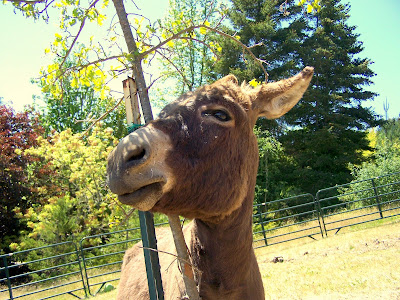 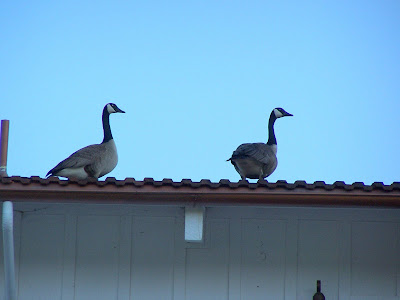 The geese landed on the roof again today! 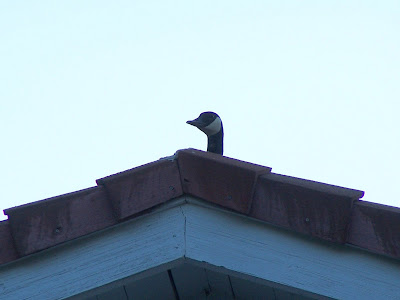 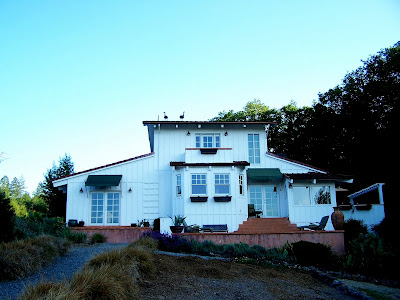 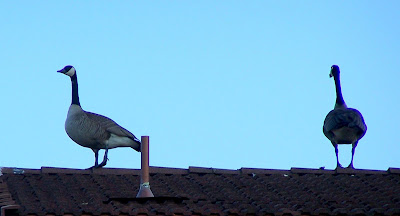 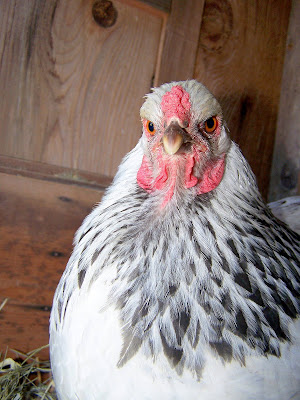 (Washington, DC – April 29, 2008) The current industrial farm animal production (IFAP) system often poses unacceptable risks to public health, the environment and the welfare of the animals themselves, according to an extensive 2½-year examination conducted by the Pew Commission on Industrial Farm Animal Production (PCIFAP), in a study released today.
Animal Welfare
IFAP methods for raising food animals have generated concern and debate over just what constitutes a reasonable life for animals and what kind of quality of life we owe the animals in our care. It is an ethical dilemma that transcends objective scientific measures, and incorporates value-based concerns. Physical health as measured by absence of some diseases or predation, for example, may be enhanced through confinement since the animals may not be exposed to certain infectious agents or sources of injury that would be encountered if the animals were raised outside of confinement. It is clear, however, that good animal welfare can no longer be assumed based only on the absence of disease or productivity outcomes. Intensive confinement (e.g. gestation crates for swine, battery cages for laying hens) often so severely restricts movement and natural behaviors, such as the ability to walk or lie on natural materials, having enough floor space to move with some freedom, and rooting for pigs, that it increases the likelihood that the animals suffer severe distress.
Public Health
Over the past five decades, the number of farms producing animals for food has fallen dramatically, yet the number of food animals produced has remained roughly constant. It is the concentration of farm animals in larger and larger numbers in close proximity to one another, along with the potential of IFAP facilities to affect people, that give rise to many of the public health concerns that are attributed to IFAP. Animals in such close confinement, along with some of the feed and animal management methods employed in the system, increase pathogen risks and magnify opportunities for transmission from animals to humans. This increased risk is due to at least three factors: prolonged worker contact with animals, increased pathogen transmission within a herd or flock, and the increased opportunities for the generation of antimicrobial resistant bacteria (due to imprudent antimicrobial use) or new strains of viruses. Stresses induced by confinement may also increase the likelihood of infection and illness in animal populations.
Environment
As with public health impacts, much of IFAP’s environmental impact stems from the tremendous quantities of animal waste that are concentrated on IFAP premises. Animal waste in such volumes may exceed the capacity of the landscape to absorb the nutrients and neutralize pathogens. Thus, what should be a valuable byproduct (e.g., fertilizer) becomes a waste that must be disposed of.
According to the EPA, the annual production of manure produced by animal confinement facilities exceeds that produced by humans by at least three times. Unlike most human sewage, the majority of IFAP is spread on the ground untreated. Manure in such large quantities carries excess nutrients and farm chemicals that find their way into waterways, lakes, groundwater, soils and airways. Excess and inappropriate land application of untreated animal waste on cropland contributes to excessive nutrient loading and, ultimately, eutrophication of surface waters. Eutrophication is an excess of nutrients in a body of water, mostly nitrates and phosphates from erosion and runoff of surrounding lands, that causes a dense growth of plant life and the death of aquatic animal life due to lack of oxygen.
IFAP runoff also carries antibiotics and hormones, pesticides, and heavy metals. Antibiotics are used to prevent and treat bacterial infections and as growth promoters. Pesticides are used to control insect infestations and fungal growth. Heavy metals, especially zinc and copper, are added as micronutrients to the animal diet.
According to a 2006 UN report, globally, greenhouse gas emissions from all livestock operations account for 18% of all anthropogenic greenhouse gas emissions, exceeding those from the transportation sector. IFAP can produce greenhouse gases such as methane and carbon dioxide. Other greenhouse gases, primarily nitrous oxide, arise mainly from the microbial degradation of manure.
Air quality degradation is also a problem in and around IFAP facilities because of the localized release of significant quantities of toxic gases, odorous substances, and particulates and bioaerosols that contain a variety of microorganisms including human pathogens. Some of the most objectionable compounds are the organic acids, which include acetic acid, butyric acids, valeric acids, caproic acids, and propanoic acid; sulfur containing compounds such as hydrogen sulfide and dimethyl sulfide; and nitrogen-containing compounds including ammonia, methyl amines, methyl pyrazines, skatoles and indoles.
It is also recognized that ammonia emissions from livestock contribute significantly to the eutrophication and acidification of soil and water. Some level of nutrient overload occurs naturally, but this process can be accelerated by human activities. Acidification can put stress on species diversity in the natural environment.
Posted by Diana at 1:21 PM