Close Encounter of Too Close a Kind with a Fox, A Phone Call from Fish & Game and a Tough Decision to Make at The Lazy Vegan 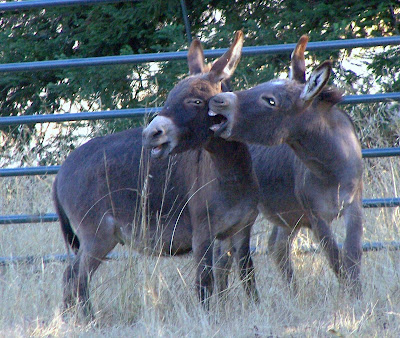 Today started off with alarmed squawking from the hens. I was just finishing a little run on the property when I heard Sophia clucking at the top of her little hen lungs. I ran over to the sound and saw a fox standing about a foot away from what I thought was a white rag- which actually turned out to be Sophia, laying on the ground! I zoomed over and the fox ran off. Sophia looked stunned and then she jumped off and also ran off to the bushes where I heard Bella doing her frantic clucking noises. Sophia looked like she had lost all her tail feathers and there were two piles of feathers nearby. I think I had just arrived in time. Seriously, I don't know how much more I can take of this predator stuff. For the rest of the day both hens stayed right near the coop- in fact, Bella got into the nesting box and really didn't seem to leave- I think she's either freaked out or sick. So we have a tough decision to make...I think that the hens need to probably leave, as sad as that is. And it is sad!!! I am very attached to my hens. They have great, unique little personalities and it is really rather shocking to think of people eating these smart and fun creatures! But as wonderful as free ranging is for them, I hate this stress they're put through at "near misses" and "close encounters". I called the man we bought them from...he has a semi-free range situation in his backyard with lots of other chickens and left a message telling him about our concerns and asking if he'd like "his girls" back. A separate reason for getting rid of the hens is actually the main reason- I think that they are attracting predators that we didn't ever have before- we certainly never saw a pair of coyotes on our property in the pre-hen days...and I can't risk our donkeys getting hurt by something that first comes in after the chickens.
If the fox encounter wasn't enough drama, I got a call back from the Fish & Game trapper today who had all kinds of mountain lion stories to share. He told me that he'd had another phone call from a woman who ALSO heard a mountain lion- only in her case, a mountain lion actually showed up the next day and got one of her sheep! But then he told me what I thought was a reassuring story about a man who had two miniature donkeys, a goat and a sheep...the mountain lion came and took the goat, and then came back four days later and tried to take the sheep- but the trapper thinks that the donkeys "wouldn't let him". He told me to install motion sensor lights around the property (so far we have one) and that the best protection would be to put the donkeys in a barn with a door at night- he told me to "enjoy my property" but to "have a swivel head" (!!). He said that usually mountain lions give no warning whatsoever and are completely quiet before they attack. He said a lot of other things that I won't bore the blog reader with- just grim details about how serious mountain lion attacks are. He's had three calls in the past five days that were mountain lion related. Some day maybe we'll get a real barn with a door- but for now we're going to have to hope that the lighting and close proximity of the barn to the house and probably (sniff) getting rid of the hens will be protection enough. The trapper guy said that the lights really do work because mountain lions have excellent vision- even at night- so having the light suddenly turn on really creates a blinding effect. Anyway, aside from worrying myself to sleep at night, there's nothing else I can be doing- so think good thoughts for Paco & Luigi and if you know of anyone who wants to donate a bigger barn with doors (in exchange for quality donkey time?), send them our way! 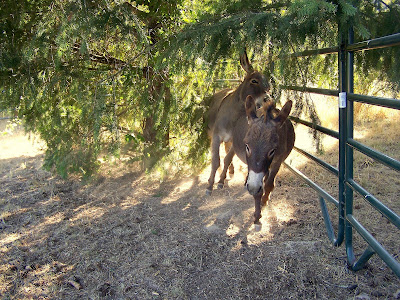 Playing by the Fir tree...they like to run around it! 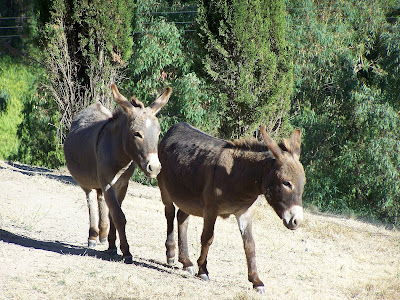 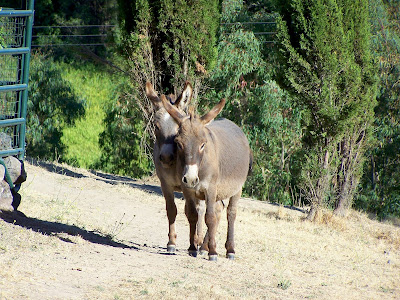 "Weegie- hold that pose...she likes it when we stand close and look cute like this!" 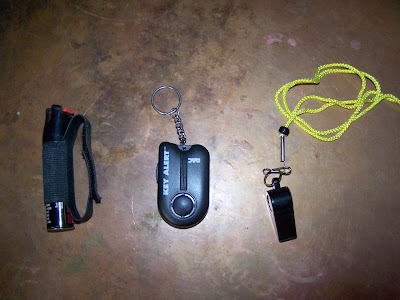 My mountain lion protection arsenal: Pepper spray I sometimes take on runs (hope it hasn't expired), a car alarm thing and a whistle that Snap gave me! I read an account of a nine year old boy who scared off a mountain lion by playing his trumpet. I have read more mountain lion accounts that I care to admit in the past few days! 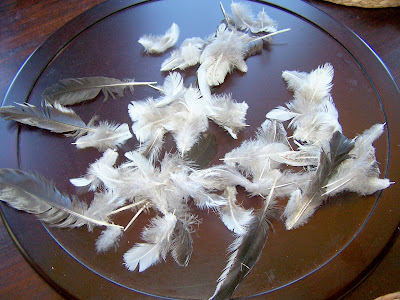 Just some of the feathers that poor Sophia lost in her traumatic event today. 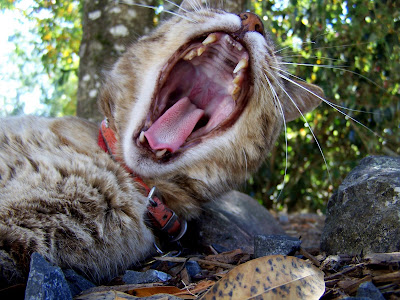 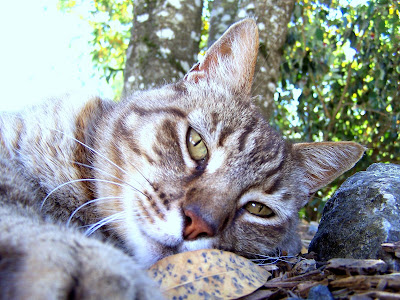 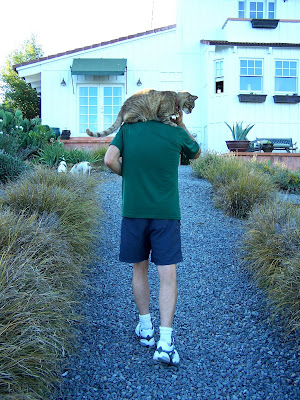 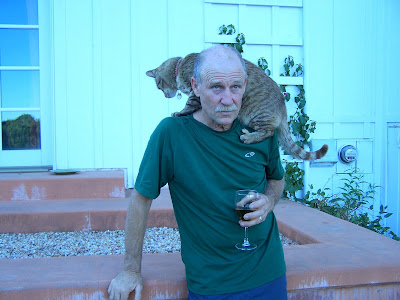 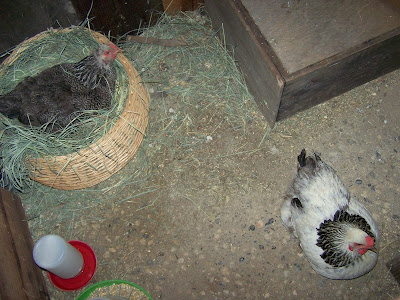 My poor girls!! Bella spent most of the day in the nesting box even though she didn't lay an egg at all today. Both girls stayed indoors a lot. 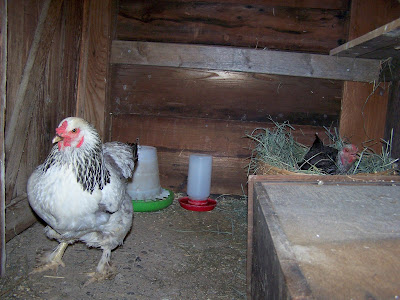 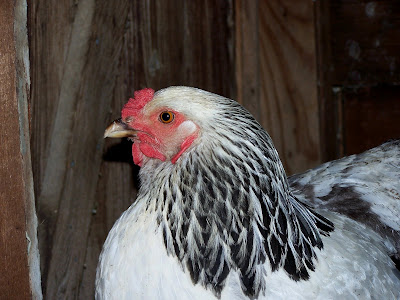 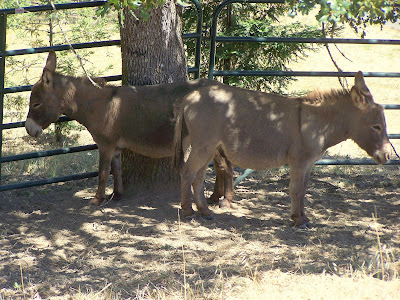 Seeking some shade by the oak, and Luigi samples the tree tape! 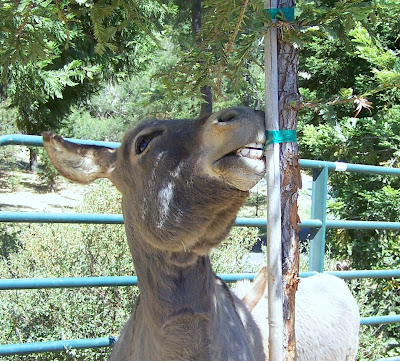 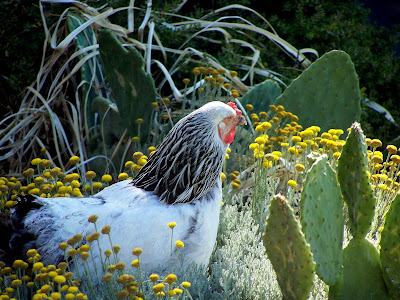 Sophia shortly after her ordeal. You can't tell from this photo, but she's lost almost all the tail feathers. 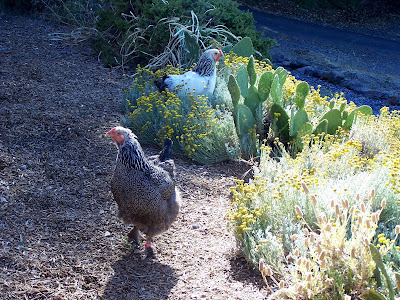 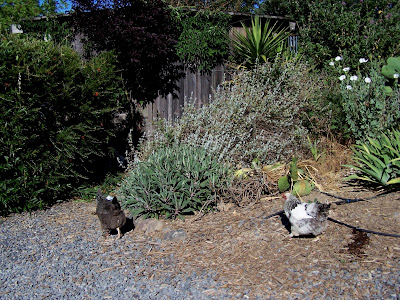 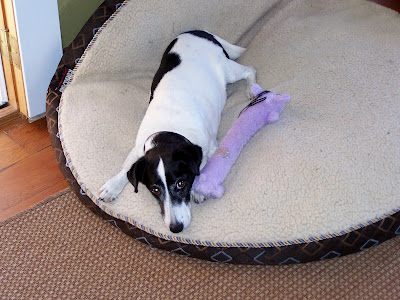