More Running with the Donkeys at the Lazy Vegan! 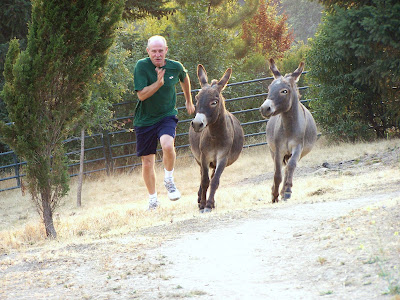 Running with the Donkeys, Part Two!
Photos really don't do this event justice...running with the donkeys is probably something that can't be captured on film- you have to be there to experience it! Randy went straight from tennis practice to the pasture this evening to run around with the boys. Once again I was unable to video tape it because I had Bravo's leash in one hand.
In other news, I don't believe I've announced on the blog yet that the Democratic Party officially has endorsed the Prevention of Farm Animal Cruelty Act- along with President Bush! To check out the new endorsements (a lot more are coming in), check out the website at www.humanecalifornia.org -- while the new endorsements are great news, the sobering news is that the opposition is coming out with a strong & well-financed campaign- here's what Wayne Pacelle of the Humane Society had to say on his blog today:

Wayne Pacelle: A Humane Nation The Humane Society of the United States
Animal Abuse by Any Other Name
Posted: 24 Jun 2008 11:56 AM CDT
It's more than obfuscation. It seems inadequate to call it a charade. Bald-faced lie comes a bit closer. Perfidious fraud feels about right to me.
I'm talking about Californians for Safe Food. A group with a name like that sounds like an advocate for passing the Prevention of Farm Animal Cruelty Act—the California ballot measure to phase out veal crates, gestation crates, and battery cages that will appear on the November general election ballot. But no, Californians for Safe Food is the creation of some of the biggest factory farms in the United States, and it's the official group opposing the Prevention of Farm Animal Cruelty Act.
Of course they can't call themselves Industrialized Factory Farms Seeking Profits at the Expense of Animals Committee. Or the Committee for Treating Animals Like Objects. We wouldn't expect that sort of suicidal honesty. But Californians for Safe Food? These people have no shame. Are there no limits to their duplicity?
Just this past week alone, egg factory farmers contributed more than half a million dollars to fight against this ballot measure to protect animals in California.
While the egg industry has a notoriously poor track record when it comes to animal welfare, the biggest contributor to our opposition, Moark LLC, has a particularly sordid history. In fact, the company was forced to pay $100,000 to settle criminal animal cruelty charges in Missouri when a concerned neighbor videotaped Moark using a conveyor belt to throw live birds into a dumpster.
Another major contributor, the United Egg Producers, had to pay $100,000 to settle the false advertising allegations—relating to misleading claims about animal welfare—of 17 attorneys general, including California’s. Even the Better Business Bureau ruled that United Egg Producers was misleading the public.
The sixth largest contributor, Norco Ranch, maintains factory farms in southern California that confine 8 million birds! They keep hundreds of thousands of hens crammed in a single building, stacking tiny wire cages upon each other. Each bird, under the industry standard, gets 67 square inches—two-thirds of the size of a regular sheet of 8 1/2-by-11-inch paper. The animals can't even extend their wings, and are typically crammed six or eight birds to a cage.
© Compassion Over Killing
The Prevention of Farm Animal Cruelty Act—qualified thanks largely to the work of 4,000 volunteer petitioners—will reduce the suffering of 20 million abused animals trapped in cages inside California factory farms. The ballot measure is also good for the environment. And it's good for food safety; and that's why it’s backed by reputable groups that have credibility and authenticity on the issue of food safety, such as the Center for Food Safety, Center for Science in the Public Interest, Union of Concerned Scientists, and the Pew Commission on Industrial Farm Animal Production.
We cannot allow these factory farming fakers to trick California voters with their big money. We must be able to compete financially. Animal advocates across the country are helping this critical effort by joining the $20/20 Campaign—giving just $20 (or more) to Californians for Humane Farms to help these 20 million animals who are depending on us. Click here to donate (donations are not tax deductible). Or, you can donate via our widget on MySpace or Facebook if you’re on those networks.
Once you donate, please forward this and spread the word (here are some ideas, including using your Facebook and MySpace pages).
By giving just $20, you can help change the world for 20 million animals. Then ask 20 friends to do the same.
In the process, you'll be equipping us to expose the deception of our opponents. Let's not let them get away with their fraud. 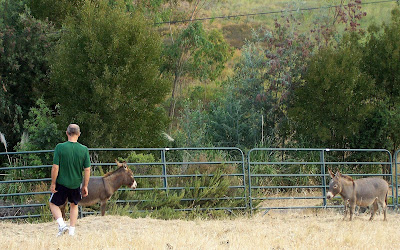 The boys know something's up. 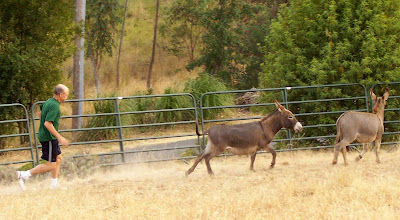 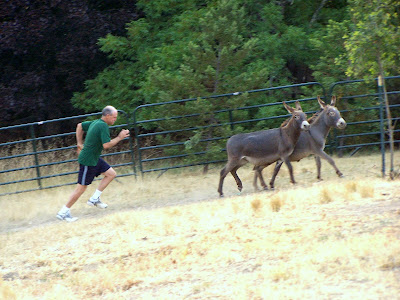 I love how they seem to be looking back at Randy.

Toby got into the act, too. 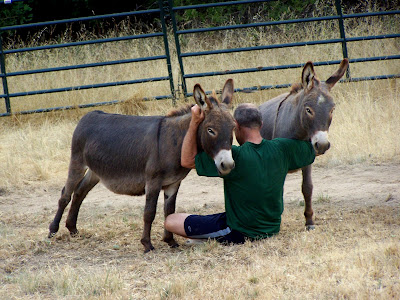 Always end with a hug! 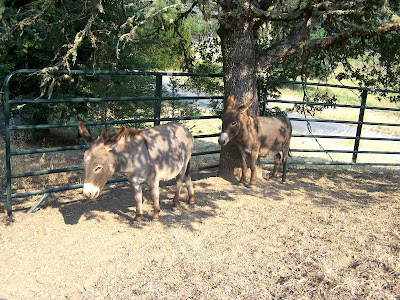 Under the oak tree today- our air quality has been terrible due to the wildfires. 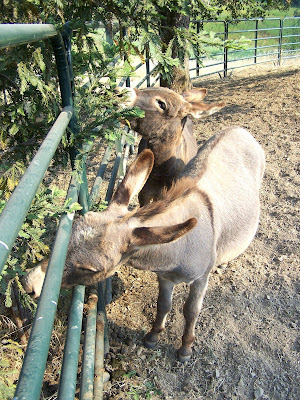 Trees, like grass, are always greener on the other side. 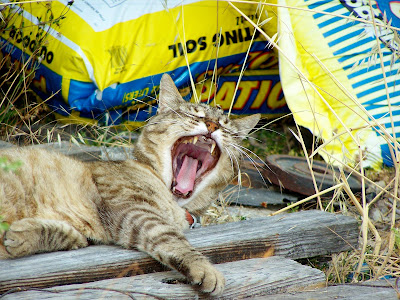 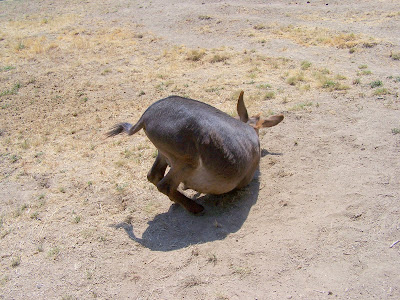 It isn't easy getting into position for a donkey dust bath. 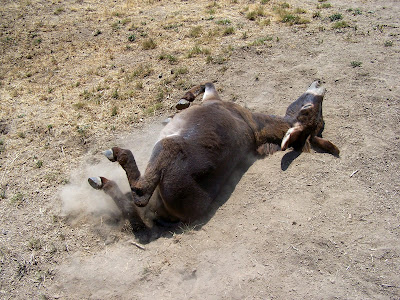 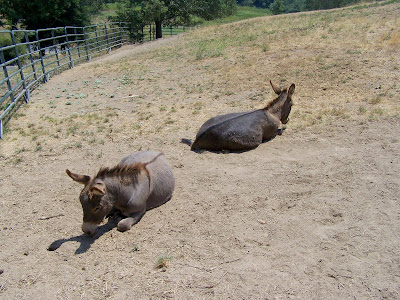 Being lazy at The Lazy Vegan. 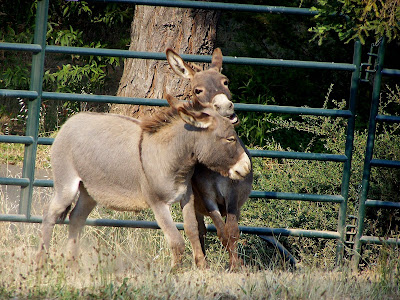 I cannot even begin to imagine having just one donkey- they spend so much time together- they're rarely seen more than ten feet from one another! 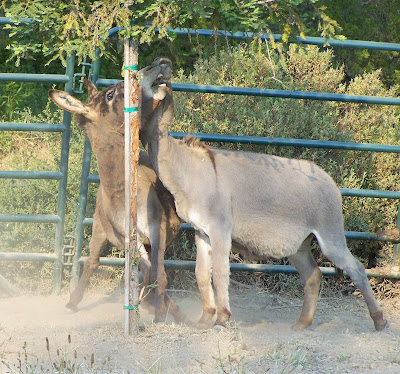 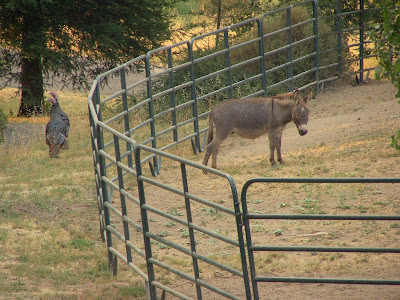 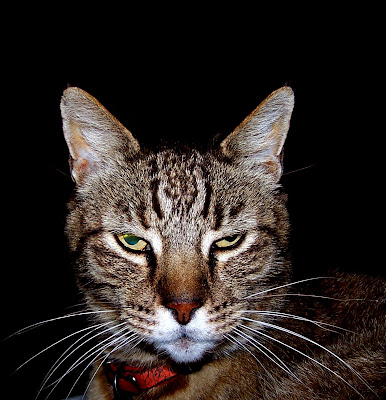 Boulder woke me up at 2 a.m., and I was in the kitchen when the motion sensor light went off again. It is like the lights on a football field when it goes on- BRIGHT! Randy and I were realizing that what I heard (well, o.k.- HE came up with this idea) could have been a bobcat instead of a mountain lion. I'm all for thinking that- but I am still going to take every precaution to protect my donkeys! 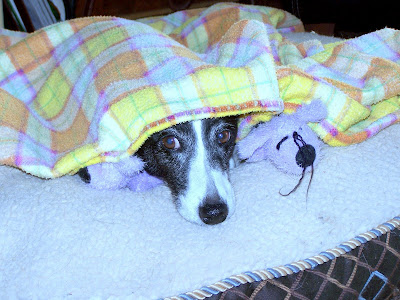 Solo now has TWO purple dogs- because I couldn't find the beloved first purple dog- so when I got hay I bought another, smaller (cheap, cheap, cheap) purple dog. He loves them. How do I know he loves them? Because he hangs out with them and gets upset if he can't find them. How do I know he gets upset? Because I just know- spend enough time with an animal and it doesn't matter that they can't talk- you just KNOW!