Extra Hee-Haws on a Thursday at The Lazy Vegan 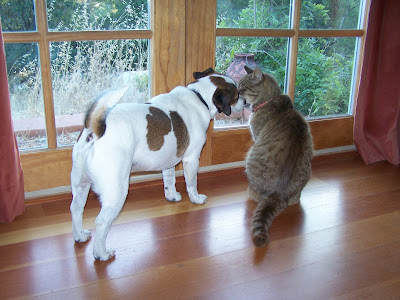 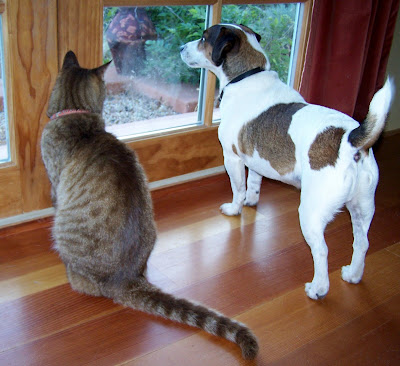 Boulder & Bravo Share a Moment While Looking out the Door!

For some unknown reason- well, I guess the reasons are hunger or boredom or both- BOTH Paco and Luigi have suddenly started hee-hawing A LOT. Three times just this evening. Thankfully Luigi is pretty quiet, because Paco is starting to rip a pretty good one. They'll both park it by the Poplar tree and will sound off, all the time staring up at the house. Or they'll pick a position in the corral and face the house and let loose. Hopefully this isn't a trend. I fed them some extra hay today (thus probably reinforcing the whole hee-hawing thing)...it could be that since they've depleted most of the grass in the pasture that they are just truly hungry.

In other news here at The Lazy Vegan, I came across ANOTHER wonderful Budweiser donkey commercial...find it here at the top of the blog. Turns out the donkey's name is Lucille...I've also posted a story of the making of a future commercial! 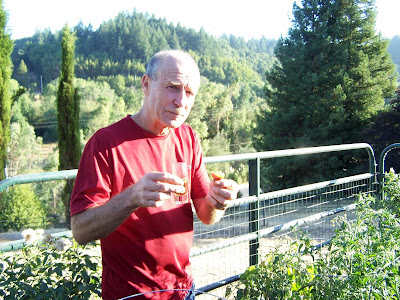 Randy tests a tomato, and the first Morning Glory appears, below. 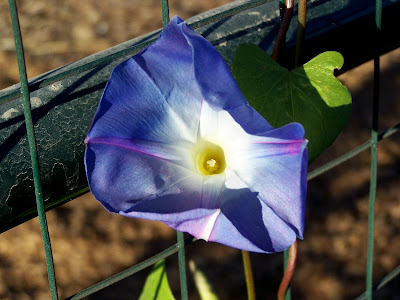 Toby thinks I have a ball. 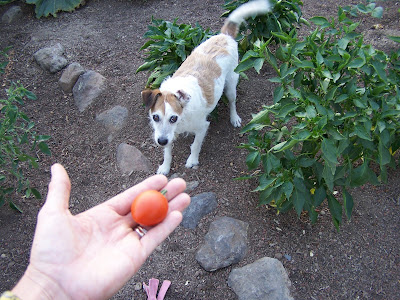 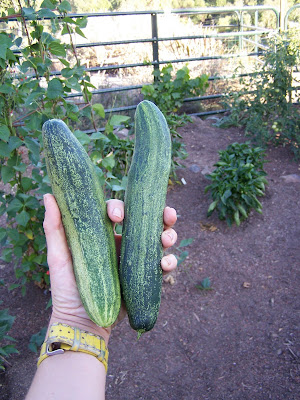 Too engrossed in their dinner to pay any attention to a fire truck on Ellen Lane. 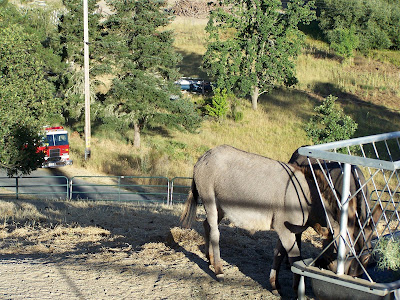 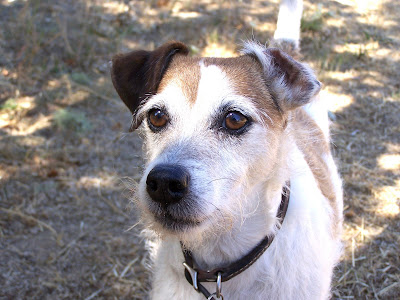 Peaches just about ready to be picked! 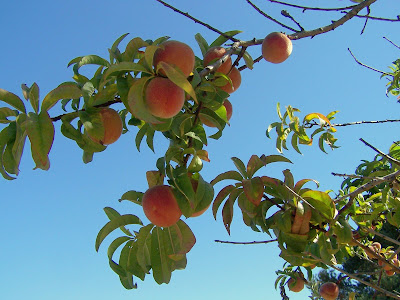 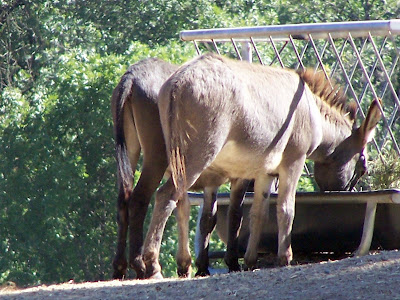 Boulder wakes from one of his many cat naps. 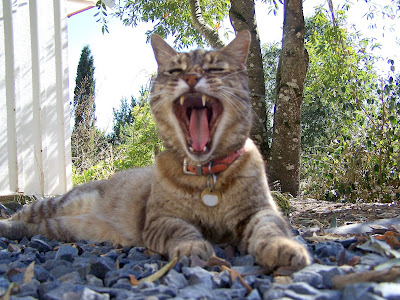 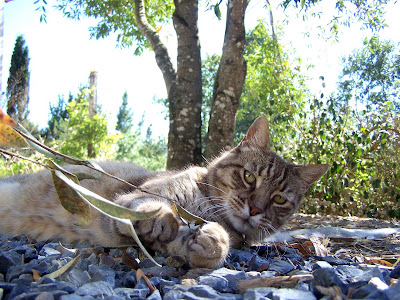 The stare-down. And then Luigi actually tried to knock me over when I came in with the hay! I had to give him a little nose pinch. Can't have them starting that bad habit. 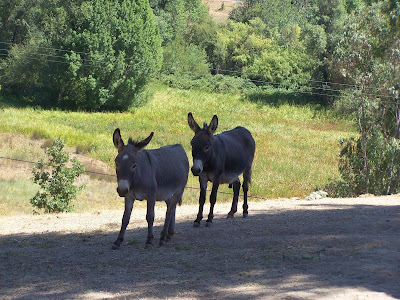 I don't know HOW hungry they really are, when they find the time to play while I go to get the hay. 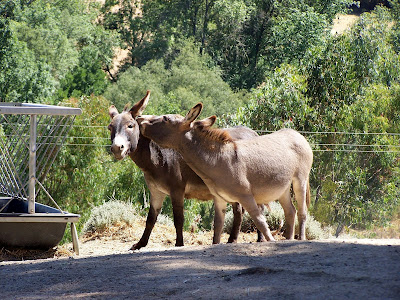 Paco's pointing out that the feeder is indeed EMPTY. 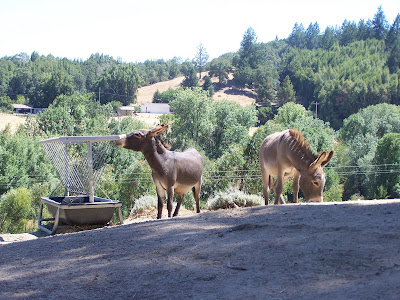 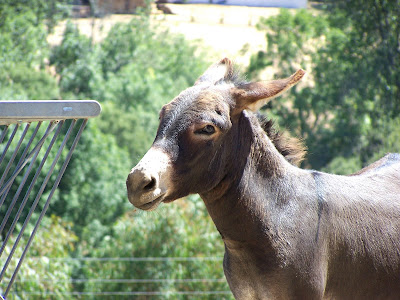 You can see there really is very little grass left in the pasture. 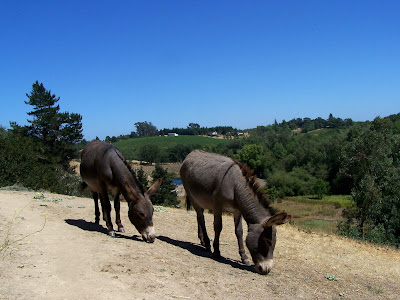 The Making of Budweiser Clydesdale/donkey commercial:
Seven ad agencies began developing ideas late in the summer, but the real fun began on an early, crisp November morning when, following breakfast burritos at 7 a.m., directors, actors and a crew of about 50 others gathered on location to bring one idea to life.
A San Fernando Valley ranch had become a Hollywood movie set filled with camera gear, props, Budweiser's trademark Clydesdale horses, a burro and even a John Deere tractor that was to be a Clydesdale stunt double for an action scene.
This ad features Turbo, a 2,000-pound, 6-foot-tall Clydesdale, and Donkey, a miniature Sicilian donkey (real name Lucille) that stands 3 feet tall and weighs 325 pounds.
Lucille made her debut as Donkey in a Super Bowl ad last year in which she interviews for a job to join the Clydesdales in pulling the famous Budweiser hitch, a 7,000-pound Studebaker beer wagon.
This ad aims to show Donkey having a challenging first day on the job trying to master stopping the hitch. (this must mean there will be a new commercial this year- FINALLY I have a reason to watch the SuperBowl!!!)
After nearly an hour of setup, the crew is ready for the first scene. Turbo and Donkey are summoned from a caravan of trailers. Also on the set: a male burro friend of Lucille's named Peter, to be used to help motivate the sometimes obstinate rising star.
Two trainers run with Donkey and Turbo (RANDY COULD DO THIS PART) across a grassy field and have them trample through a line of shrubbery. Six other Clydesdales will be filmed separately and edited into the shot. Turbo needs a break after another challenging scene in which he and Donkey tow the hitch down a hill and across a ravine. They pull it off in four takes.
The only special-effects trick will be a shot in which the stunt tractor blows through a fence. Computer editing will replace the tractor with the Budweiser hitch.
Down to the last detail, Donkey is dressed like a Clydesdale, with ribbons in her mane and on her tail and faux "feathers" on her legs to match the natural white, shaggy bottoms of the Clydesdales' legs.
Outrageous? Maybe. Costly? Certainly. But the pressure to deliver a Super Bowl MVP is immense.
"Advertisers spend a great deal of creative effort on these ads," says Thomas Cline, professor of marketing at St. Vincent College in Latrobe, Pa. "If an advertiser is going to spend $2.4 million (for the time), the ads are going to have the best writers, the best directors and the best designers."