Rainy Day and World Vegan Day on a Saturday at The Lazy Vegan! 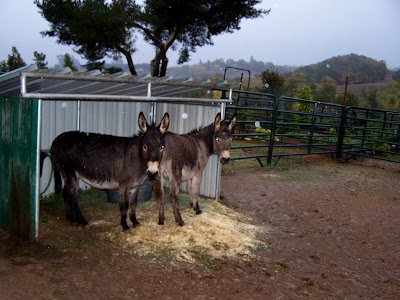 Poor sweet donkeys eat their dinner while it rains- I'm glad we got the "dining shelter" just for this purpose!!
Today is "World Vegan Day"- and the ironic thing about that is that it is also the one year anniversary of going vegan for us!! Last year I had started to work on the animal campaign in early October- and after seeing all the videos & photos of the horrific conditions that ALL animals raised for food were living in, I decided I needed to "go vegan"- but I wanted one last Halloween with milk chocolate (sad, but true)...so I gave myself till the day after to completely make the transition- having NO idea that it was World Vegan Day! Pretty funny. It has been quite the year- those first few months were hard just "learning the ropes"- there are so many hidden animal ingredients in foods, especially really processed foods. Along the way I learned how to bake my now rather famous vegan cake. I also made a lot of really awful meals! Now I don't miss milk or eggs or cheese at all- and Randy never clears his throat any longer- something he used to do daily!! And we've discovered we're in good company- many, many people are vegans-including Clint Eastwood, Toby Maguire (Spiderman actor), James Cromwell (actor from BABE- he was the farmer- he's a huge advocate for pigs now)...and just this past month Ellen Degeneres went vegan- after hosting a party for Prop. 2 and learning "the facts"!!
Aside from that, it has been a dreary rainy day today. The poor donkeys hung out in the dry barn for most of the day. The rally & march for Prop. 2 was even cancelled due to the weather- which I was really bummed about. But I'll be back out "signing" as soon as tomorrow- just a few days left!! Check out the Time Magazine article about World Vegan Day at the bottom of this posting! 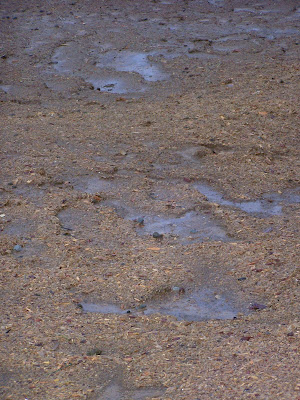 The photo above gives you an idea of how the pasture is doing... 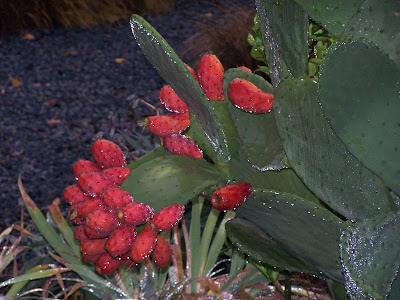 One spot of color on a bleak day- the fruit of the cactus! 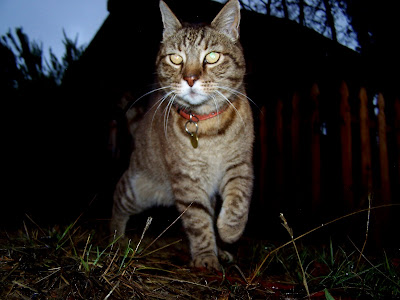 Boulder only went out when absolutely necessary today. I've been putting the heating pad thing I have for him in his little bed and it makes him want to sleep all day! 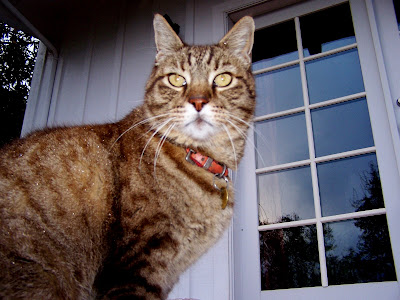 The pups were all couch potatoes, too. 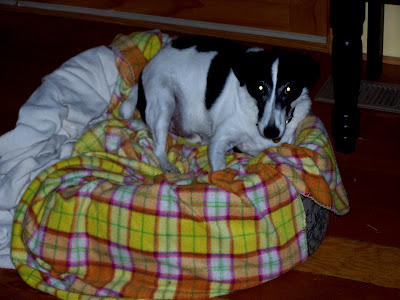 There's nothing like sleeping on laundry fresh from the dryer! 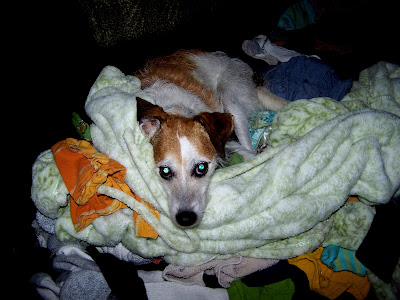 The boys were briefly banished to the deck when Paul & Lindsay stopped by because they were being so wild! 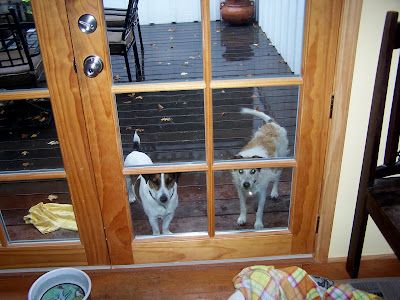 Taking Paul's photo with Bravo has become a tradition when he visits now. 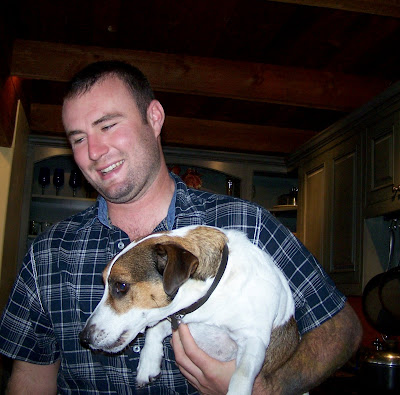 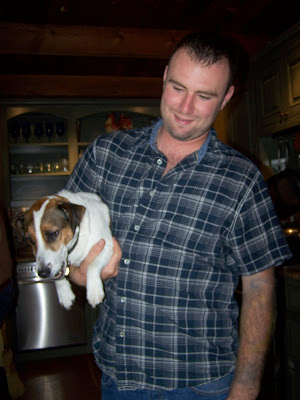 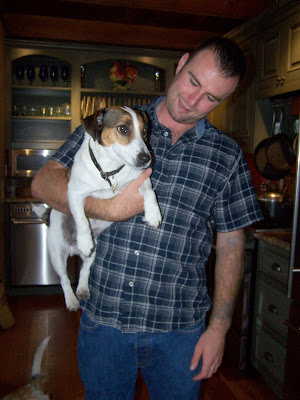 Solo got some attention, too! Solo was beside himself. 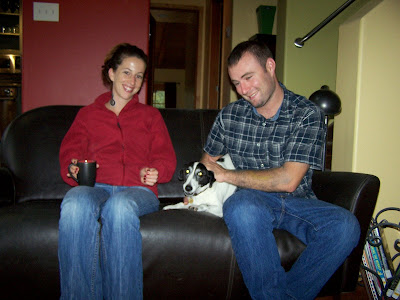 From Time Magazine
November 1 is World Vegan Day, a celebration of people who don't eat meat. Or eggs. Or cheese. Or mayonnaise. Or honey. Or whey. Or gelatin. Or anything that comes from or includes an animal. Nor do they use any clothing, accessory or object made from an animal. No leather, no wool, no pearls, no ivory-keyed pianos. The animal-free holiday began in 1994, to commemorate the 50th anniversary of the Vegan Society.
Veganism is an extreme form of vegetarianism, and though the term was coined in 1944, the concept of flesh-avoidance can be traced back to ancient Indian and eastern Mediterranean societies. Vegetarianism is first mentioned by the Greek philosopher and mathematician Pythagoras of Samos around 500 BCE. In addition to his theorem about right triangles, Pythagoras promoted benevolence among all species, including humans. Followers of Buddhism, Hinduism, and Jainism also advocated vegetarianism, believing that humans should not inflict pain on other animals.
The meatless lifestyle never really caught on in the West, although it would sometimes pop up during health crazes and religious revivals. The Ephrata Cloister, a strict religious sect founded in 1732 in Pennsylvania, advocated vegetarianism — as well as celibacy. The 18th century utilitarian philosopher Jeremy Bentham believed that animal suffering was just as serious as human suffering, and likened the idea of human superiority to racism.
The first vegetarian society was formed in 1847 in England. Three years later, Rev. Sylvester Graham, the inventor of Graham crackers, co-founded the American Vegetarian Society. Graham was a Presbyterian minister and his followers, called Grahamites, obeyed his instructions for a virtuous life: vegetarianism, temperance, abstinence, and frequent bathing. In November 1944, a British woodworker named Donald Watson announced that because vegetarians ate dairy and eggs, he was going to create a new term called "vegan," to describe people who did not. Tuberculosis had been found in 40% of Britain's dairy cows the year before, and Watson used this to his advantage, claiming that it proved the vegan lifestyle protected people from tainted food. Three months after coining the term, he issued a formal explanation of the way the word should be pronounced: "Veegan, not Veejan," he wrote in his new Vegan Society newsletter, which had 25 subscribers. By the time Watson died at age 95 in 2005, there were 250,000 self-identifying vegans in Britain and 2 million in the U.S. Moby, Woody Harrelson and Fiona Apple are vegans. So is Dennis Kucinich.
Strict veganism prohibits the use of animal product, even if it isn't food, but like any lifestyle choice that ends in "-ism," there are plenty of people who cheat. The vitamin B12 is found almost entirely in animal products, so many vegans eat fortified food or take a vitamin to get the right amount. And while American vegetarianism has broken free of its philosophical and religious roots, becoming an accepted health choice — many restaurants offer vegetarian options and most dinner party planners now ask "is anyone vegetarian?" before planning the menu — veganism is still tied to the animal-rights movement and is out there on the fringe.
Vegans can be as strict or lax as they want to be in their food choices: the International Vegetarian Union's website includes vegan-friendly reminders about baking pans greased with animal fat, grain cereals that include animal-based glycerin, and sugar refined with bone charcoal. Then there's raw veganism, which is an offshoot of veganism in which none of the food can be cooked. Take that a step further and you get "mono meals," the idea that the stomach should only digest one type of food at a time. Basically, if you eat it, there is probably someone else out there who won't.
Posted by Diana at 7:10 PM