Finding Out About "Freegans" at The Lazy Vegan! 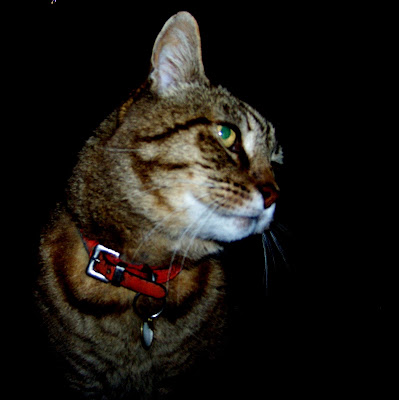 Boulder is NOT a "Freegan" at The Lazy Vegan!

Over the Thanksgiving holiday, Claire brought up the term "freegan" and briefly explained what it was. I did a little research this evening and found a great article with the "freegan" explanation. And I thought being just a vegan was a challenge at times...wait till you read about being a freegan! The article is at the bottom of this posting.

It was a gray & chilly day again today but the animals still managed to have fun. I need to do a hay run this week- Paco and Luigi are really chowing down! They didn't like the first bale of hay I got a few weeks ago- it was too weedy. And the recent bale I got (the one that caused me to break out in hives) is odd, too- they really pick through it. I think I may have fussy donkeys. Actually, I may have CREATED fussy donkeys. But never mind. They're worth the extra work! On Friday I'll probably take the truck and get some new hay- but this time I am going to ask to look at it first. I got that idea from the Miniature Donkey Handbook, which suggested asking the feed store to break open a bale of hay before buying so you can make sure all the flakes are decent orchard grass hay. This is the same handbook that says donkeys are "low maintenance." HA! 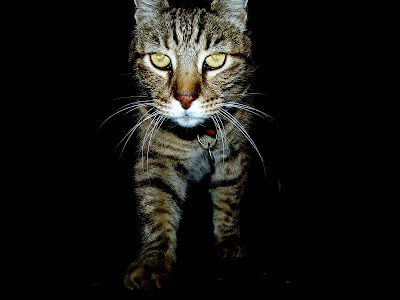 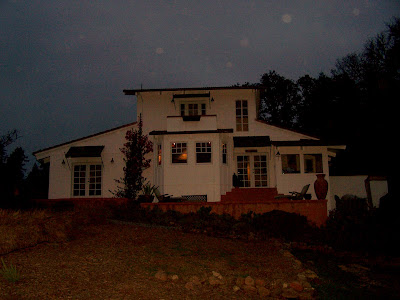 Nightfall at The Lazy Vegan. 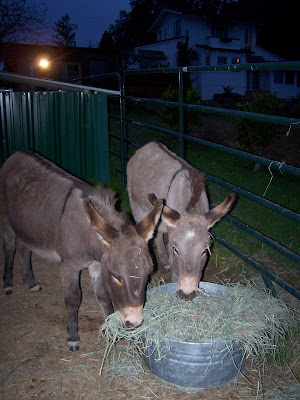 The fussy donkeys eating their bedtime flake of hay. 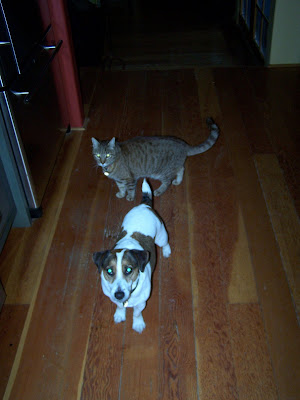 Dog and Cat informing me that it is dinner time! 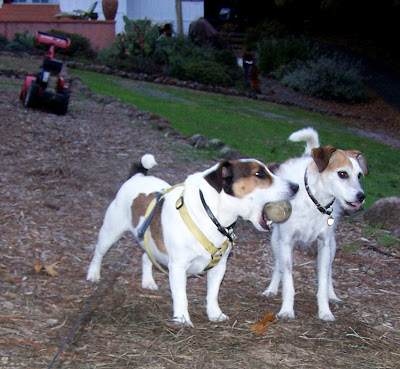 Even when on a leash, Bravo manages to steal the ball! 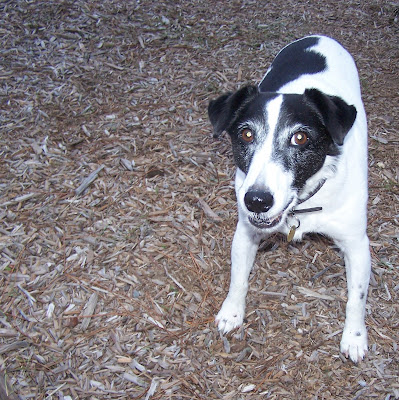 Solo ran around a lot this evening. I've been heating up a heating pad for him at bedtime- one of those soft rice bags- he loves it (I just know he loves it- he snuggles right up to it) and I think it is good for his old little legs. 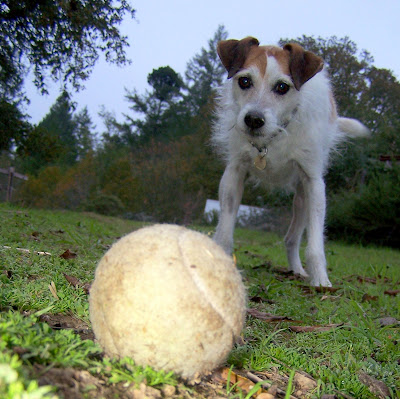 Toby loves the ball so much that it probably does look this big to him! 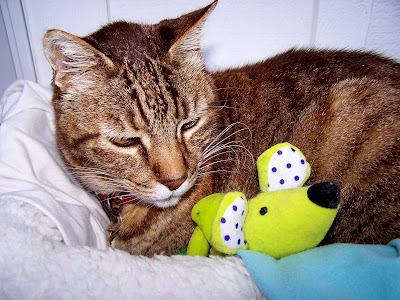 Boulder naps in his outdoor bed with his toy mouse. 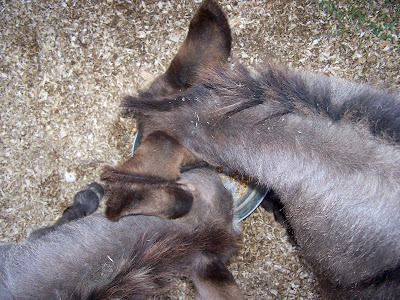 One thing the donkeys aren't fussy about is the sweet grain! 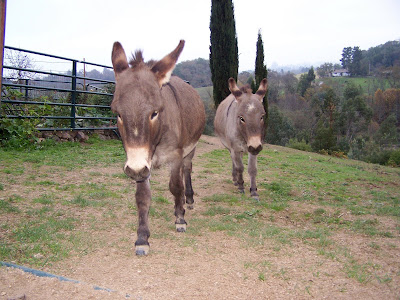 They come pretty quickly into the corral when they hear me banging the sweet grain pan! 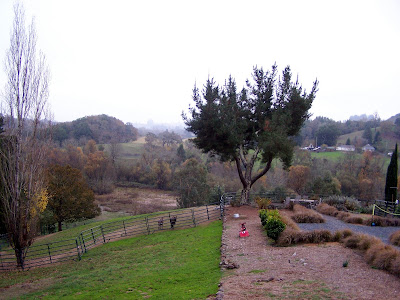 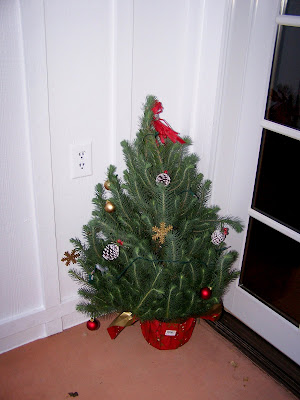 HEY!! I bought a Christmas tree today- and it is just my kind of tree: it is alive and already decorated and has a string of lights! 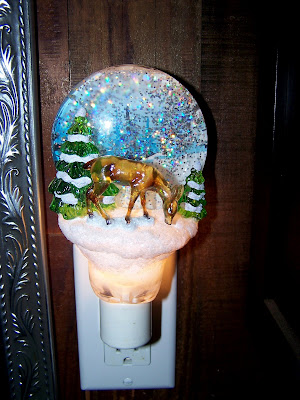 And c'mon- you can't say I'm not into the holiday spirit- look at this nifty seasonal night light!
WHAT IS A FREEGAN?
Vegetarian, vegan.. and now, freegan. Aren't these labels we apply to ourselves great? One of the occupational hazards of being a highly gregarious animal I guess. I hadn't struck this term before, so with curiosity piqued, off I went to discover a little more about the Freegan lifestyle.
The term Freegan is the marriage of two words - Free and Vegan. A vegan is someone who avoids all products that originate from an animal; and I believe that with some vegans, it goes as far as insects as well, including honey.
Freegans take things a step further. They are people who limit the amount they participate in purchasing and selling and strive to consume as few resources as possible. They live their lives based on progressive principles and oppose materialism, conformity and greed. All sounds pretty good, except whenever you take on a label and abide by a set of guidelines set down by others, that's, well, conformity. It's a minor point though in the bigger picture of a Freegan lifestyle.
I can most certainly understand how Freegans feel. The more I learn about living a greener life, the more I find that our society has evolved in such a way that everywhere you turn and everything you buy these days has some sort of negative environmental or societal impact. It can be a little disheartening. For instance, people foresaking meat and switching to soy could be contributing to the destruction of the Amazon or other habitats. It's quite a web we've weaved for ourselves environmentally speaking.
Freegans approach these kinds of issues by not only growing their own food, but also by supplementing their diet via food that others throw out - yes, dumpster diving. As gross as that might sound, I pretty much applaud this. I've been involved with the food trade a couple of times in my career and something that used to apall me was the waste.
In my last food related job, we were expressly prohibited by the parent company from giving excess food to local charities because of legal issues; i.e. the threat of being sued if the food should cause poisoning in any of the recipients. It was disgusting - at both ends of the equation. Night after night, perfectly good food thrown out, amounting to tons a year; meanwhile someone in the world dies of hunger every second.
Back to the Freegans; aside from food, they also engage in other forms of scavenging and recycling the refuse of others. Nothing wrong with that at all, although I think I'd find someone scrabbling through my garbage can late at night a little unnerving.
Other admirable practices of Freegans include, recycling and composting of their own waste, eco-friendly transportation and they appear to have strong sense of community - giving as well as taking.
They are also known to 'squat'; which is the illegal occupation of abandoned or disused buildings - that's a point I'm not too keen on as I'm a believer in respecting the law or changing it. I do understand their viewpoint; i.e. that to own a building and not use it is not only environmentally irresponsible, it's a social issue given there are so many homeless people who need a roof over their heads. I was homeless for a while many years ago and it was a terribly degrading experience.
Freegans also limit the amount of paid employment they are involved in, often not having any sort of job and would appear to be for the most part anarchists; and I don't necessarily mean that in a negative way.
It sounds like a bit of a feral lifestyle, but as is the case with people of all belief systems, there's much to learn from the Freegan approach. As I was reading over materials, it did reinforce with me something I do strongly believe - it's very hard to live a truly green lifestyle in an urban environment.
If you'd like to learn more about the Freegan lifestyle, and there is a quite a bit to it, Freegan.info is a good resource to use as a starting point.
-Michael Bloch Green Living Tips.com
Green Living Tips is an online resource powered by renewable energy offering a wide variety of earth friendly tips, green guides, advice and environment related news to help consumers and business reduce costs, consumption and environmental impact .
Posted by Diana at 5:14 PM