Things are Warming Up at The Lazy Vegan! 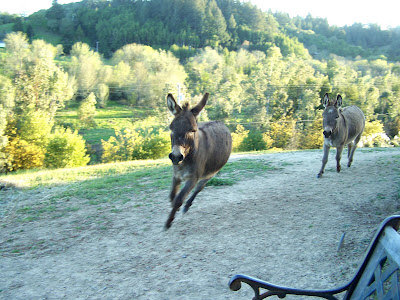 Things are warming up at The Lazy Vegan...today it was almost hot (by my standards)! The donkeys went crazy running around after dinnertime, bucking and kicking and snorting away...putting on quite the show for neighbors driving and walking by! They both have a funny way of putting their noses in the air as they run. Tomorrow I head to the feed store to stock up on supplies- new hay (which I am first going to investigate to see if it passes my new standards), pine shavings, sweet grain, salt licks, etc. The donks are out of everything! 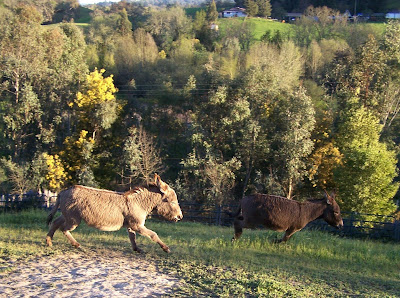 You can't really tell from the photos, but they were running FAST. 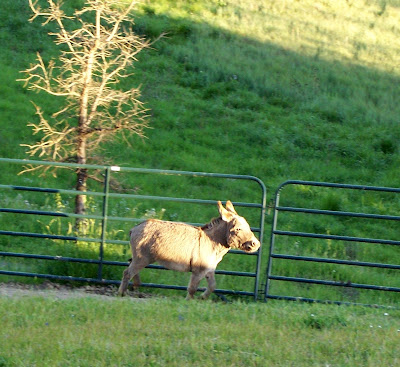 Weegie is really branching out lately- he's not as shy as he used to be. 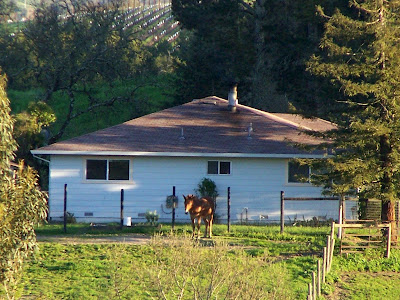 The horse across the way enjoys the last bit of sunshine! 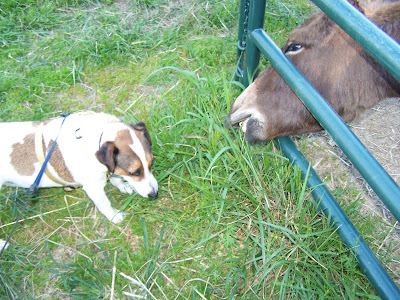 The funny thing about the photo above is that Bravo was actually eating grass, too. 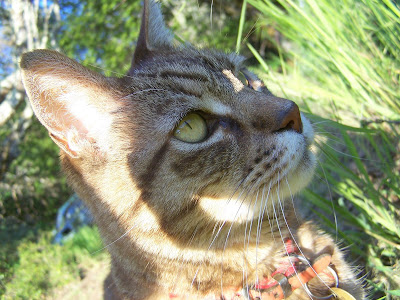 My very finicky feline. Boulder is VERY fussy about what he eats now, despite a wide variety of cat food choices. 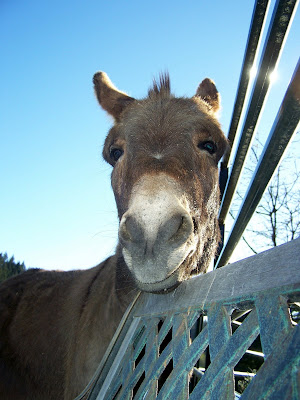 Sometimes Paco will head to this bench first thing when I let the donks out in the morning. He loves a good scratch! 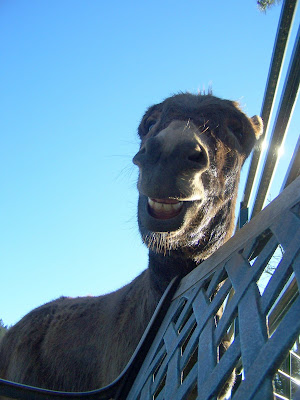 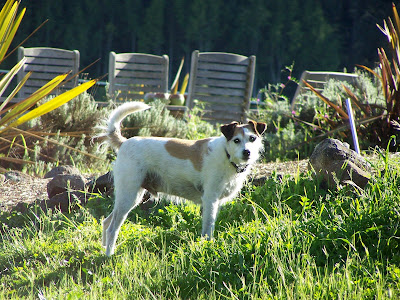 The warmer weather didn't slow Toby down a bit. 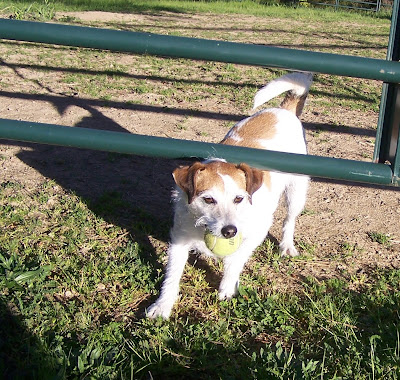 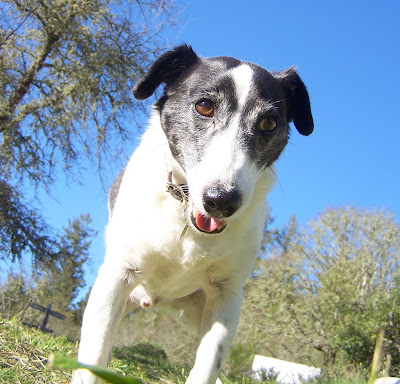 But Solo was a tad slower!
I've always thought it was pretty funny that I live in Forestville and my sister lives in Foresthill...so I checked out our hometowns on line!
A Side by Side Comparison of ForestHILL and ForestVILLE!
Foresthill is a census-designated place (CDP) in Placer County, California, United States. It is part of the Sacramento–Arden-Arcade–Roseville Metropolitan Statistical Area. The population was 1,791 at the 2000 census. Foresthill is located on a broad ridge between the North and Middle Forks of the American River on the gold-bearing gravel bed of an ancient river. In the spring of 1850, miners came to the Forest Hill Divide in large numbers. There was one route from Auburn through Yankee Jim's and one from Coloma. At the junction of these trails, the Forest House hotel and trading post was built. The height of mining activity in Forest Hill began in 1853 after a winter landslide at the head of Jenny Lind Canyon exposed numerous nuggets of gold. The Jenny Lind mine produced about $2,500 of gold a day for a while, up to a total output over $1 million by 1880. The combined production of all the mines in the Forest Hill area was estimated at $10 million by 1868 with gold selling for $16 an ounce. In the 1860s, there were about 125,000 feet (38,000 m) of hard-rock runnels dug into the hillsides in, around and under Forest Hill. By 1857, this area had become an important center for trade among the many gold camps on the divide. In 1862, the Hardy-Kennedy building was erected - the first fireproof store in Forest Hill. This building, now known as the Langstaff building, is still being used by the merchants of Foresthill. By 1880, Forest Hill was one of the largest towns in Placer County. The town had an 80-foot (24 m) wide main street befitting such an important place.As of the census[2] of 2000, there were 1,791 people, 673 households, and 465 families residing in the CDP. The population density was 159.9 people per square mile (61.7/km²). There were 717 housing units at an average density of 64.0/sq mi (24.7/km²). The racial makeup of the CDP was 90.34% White, 0.61% Black or African American, 2.68% Native American, 0.06% Asian, 0.45% Pacific Islander, 1.95% from other races, and 3.91% from two or more races. 5.75% of the population were Hispanic or Latino of any race.
There were 673 households out of which 38.2% had children under the age of 18 living with them, 49.6% were married couples living together, 12.9% had a female householder with no husband present, and 30.8% were non-families. 22.3% of all households were made up of individuals and 7.4% had someone living alone who was 65 years of age or older. The average household size was 2.66 and the average family size was 3.14.
In the CDP the population was spread out with 30.2% under the age of 18, 6.4% from 18 to 24, 30.3% from 25 to 44, 23.1% from 45 to 64, and 10.1% who were 65 years of age or older. The median age was 36 years. For every 100 females there were 105.6 males. For every 100 females age 18 and over, there were 102.8 males.
The median income for a household in the CDP was $34,348, and the median income for a family was $41,161. Males had a median income of $41,438 versus $25,813 for females. The per capita income for the CDP was $19,409. About 9.9% of families and 12.6% of the population were below the poverty line, including 17.2% of those under age 18 and 4.8% of those age 65 or over
Forestville is a census-designated place (CDP) in Sonoma County, California, United States. The town came into existence during the late 1860s and was originally named Forrestville, after one its founders, but the spelling long ago became standardized with one "r". The population was 2,370 at the 2000 census, although the sign along the road into town continues to claim that the population is 1,776. Forestville is home to Forestville Elementary School and El Molino High School, a public school, which provides 9-12th grade education to the majority of Russian River residents. During the year of 2005, enrollment was 1,099 students.
Forestville's unofficial motto is "Forestville, The Good Life," and is derived from license plate holders sold at the local hardware store. The major road through town, Highway 116, is also called Front Street for the length of the town, a distance of about three blocks, between Covey Road and Mirabel Road. The "downtown" blocks were first built during the 1870s and 1880s, but a fire destroyed many of the older structures, and what remains dates mostly to the early 20th century.
The town has one gas station, one bar, two grocery stores, two convenience markets, several churches, a number of restaurants, a post office, an assortment of small businesses, a fire station operated by a volunteer fire department, a volunteer-run Youth Park, and 3 ATMs. The annual Forestville Youth Park Parade is held each June as a fund-raising event, and culminates in two days of music, bingo, and carnival rides in the Youth Park, with food and handicrafts booths provided by local vendors and non-profit organizations. Father afield, along the Russian River and Eastward, are a number of bed and breakfast inns and wineries. To the South, just beyond the non-existent "city limits" (a green sign located in someone's yard) is Mom's Apple Pie, an award-winning pie bakery.
Posted by Diana at 2:25 PM