Bravo in the front seat...and Toby and Solo in the back (you can't even see them!). 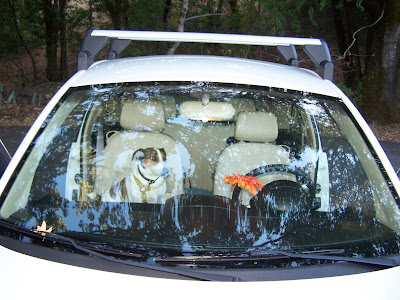 Just a short blog posting today. I started the day off with a "test drive" with all three terriers, to try out their new doggie car seats. This is the first time I've ever attempted to drive around with all three of them. And let me tell you- it is a GOOD idea to confine Jack Russell terriers to special little seats in a moving vehicle!! Just getting them all buckled in was a huge event. I wish I could have taken more photos- they did look especially cute in the Beetle! I drove a few loops around town and then stopped at the cafe to say hi to Karina. That turned out to be a mistake. It had been relatively smooth sailing up before the stop, with the exception of Bravo doing his hyperventilation routine in the front seat (but, thankfully, he didn't throw up!). As soon as I pulled into the cafe parking lot, I realized there was another dog in the car next to us. All hell broke loose. Toby went ballistic in the back seat. Solo began to howl. Bravo panted even more. They all tried desperately to get OUT of their little seats. So I instantly backed Beetler up and got the heck out of there! The entire ride home was chaos, but everyone was still safely secured. I had a near-accident when a neighbor swung out of her driveway and I had to slam on my brakes, which was a good test of the doggie seats- I discovered that Toby's seat needs to be tightened. Anyway, I plan on taking them out again tomorrow a.m. All of this is to get them ready for wedding day, when they all get to take the short ride to the vet to be boarded for the day! In other Lazy Vegan news, the foreman took a well-deserved afternoon off and went to play golf with the groom and others. He hadn't been gone all that long when I got the phone call that he had forgotten his shoes (this after I had asked him as he was leaving: do you have your golf shoes? But no matter). So Beetler and I zoomed (well, Beetler did the zooming part) to the Windsor golf course to deliver the shoes...and since I happened to have my camera with me, I documented the event! 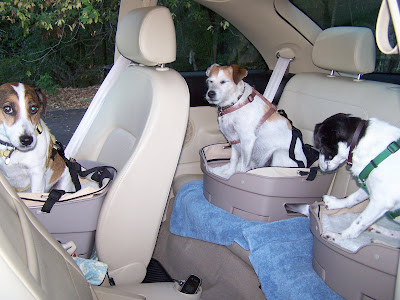 All buckled up and ready to go! 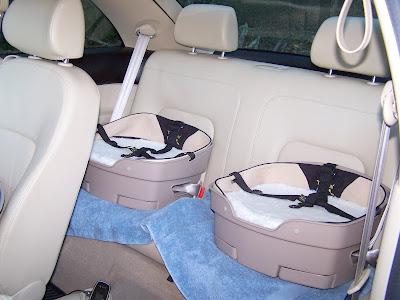 It took a while to install the seats. The seat belt goes through the bottom, just like a child car seat. 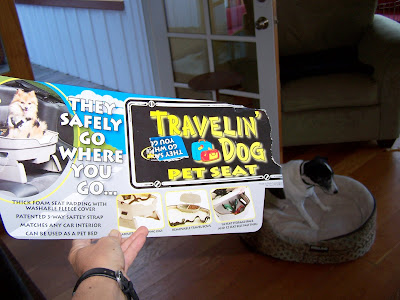 "They Safely Go Where You Go..." although maybe not quietly! 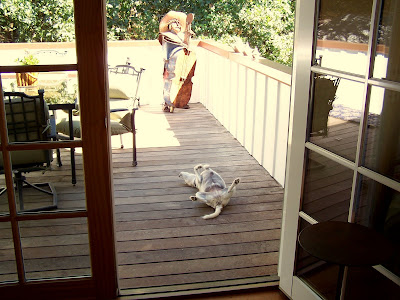 After the exciting test drive, Toby just had to chill out on the deck for a bit. 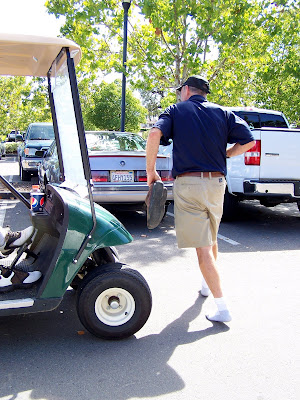 Yep, that's the foreman in his socks. They happen to be brand new socks that I just bought for him. Nevertheless, you don't really want to play golf in socks instead of shoes! 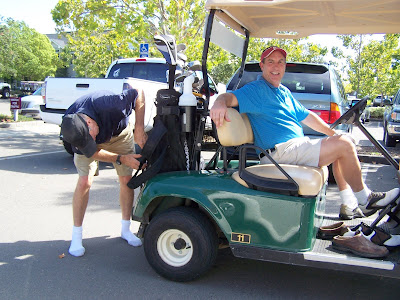 Our friend Rich told the foreman to hurry it up. 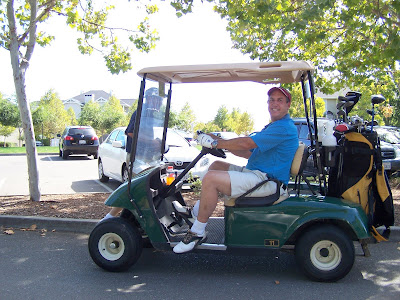 Rich complimented how cute Beetler was...and I said the golf cart was pretty darn cute, too. 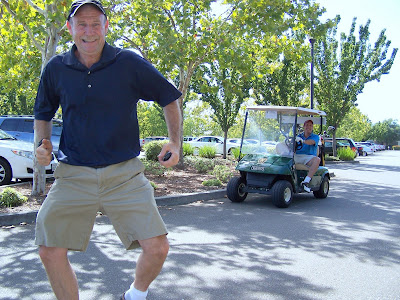 The foreman, sheepish about forgetting his golf shoes, hams it up for the camera! 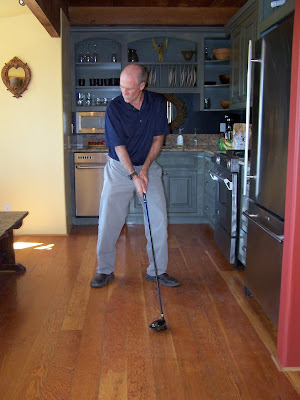 Maybe he forgot about the shoes because he had been so busy testing out his new driver at home beforehand. The foreman certainly deserves some golf time after all the hard work he does here at The Lazy Vegan!
Posted by Diana at 5:12 PM