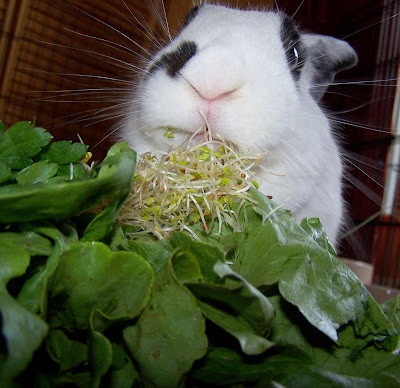 It was a busy day for Wasabi today. In the morning we moved her pen down to the kitchen, thinking that she would like a change of scenery from upstairs and that it would be a good opportunity to see & sniff the dogs without making contact with them. We put the terriers on the deck with the door closed and the foreman brought her downstairs. Well, it was NOT a great outing. She was very tentative (and who wouldn't be, with three obnoxious terriers panting at the door!) and it took her quite a while just to get comfortable with the new surroundings. So we didn't even attempt to bring the dogs closer. In another few days or so we'll introduce the dogs one at a time upstairs, on Wasabi's "turf" and hopefully that will have better results. Also today Wasabi got her first visit from her grandma Snap! And her friend, Jackie- another friend, Kim, couldn't make it- so there are future opportunities for more visits! 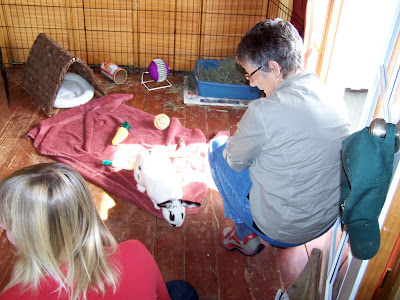 Wasabi was a polite little bunny during the visit but was still a bit reserved from her kitchen outing. 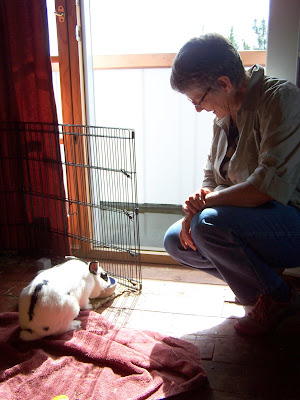 Munching on some hay pellets! 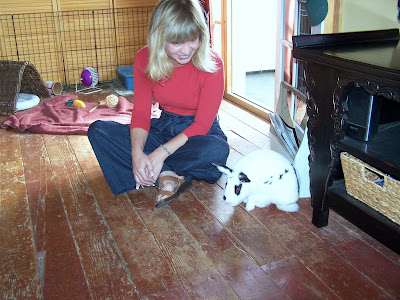 I think Wasabi was thrilled to have company. 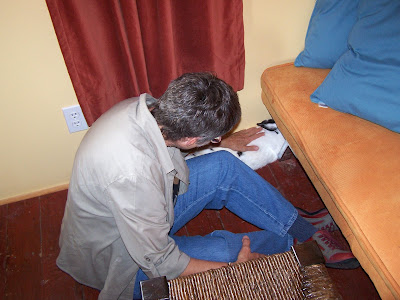 She took to the protective cover of the futon right after we brought her back up from the kitchen. 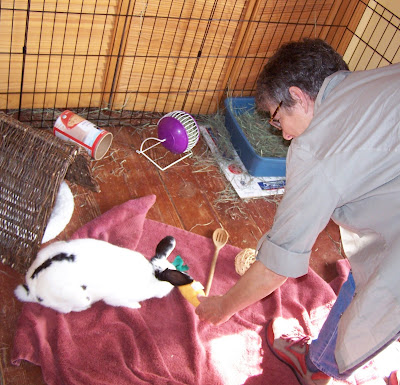 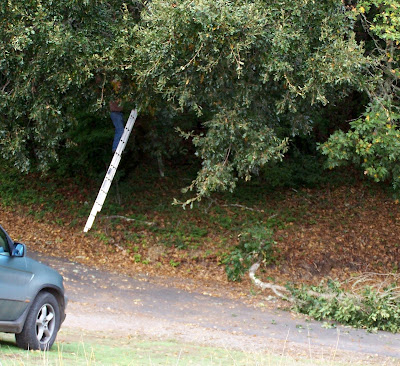 The foreman took down some huge oak branches today. 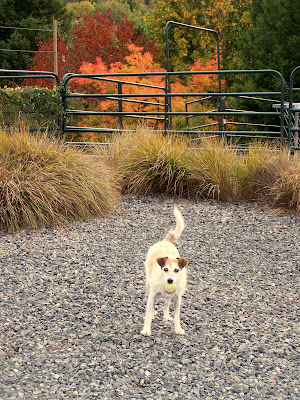 Toby with some Fall colors. 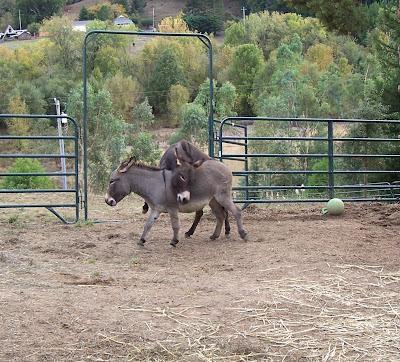 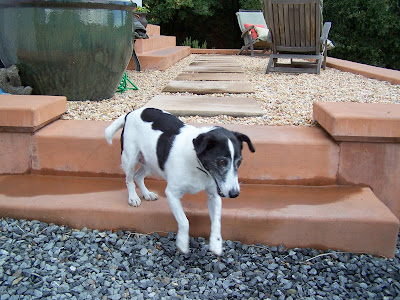 Solo will be the first dog to meet Wasabi. 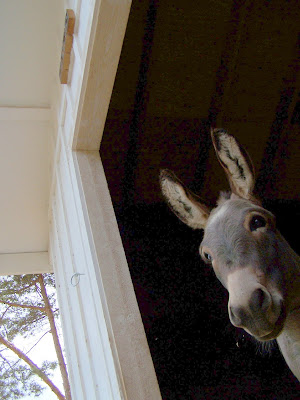 Weegie had a good day! 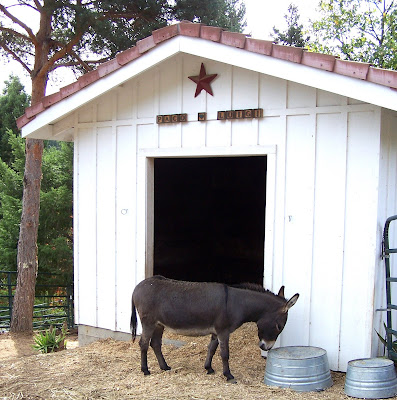 It was nice to have two days of dry weather to help soak up the mud. 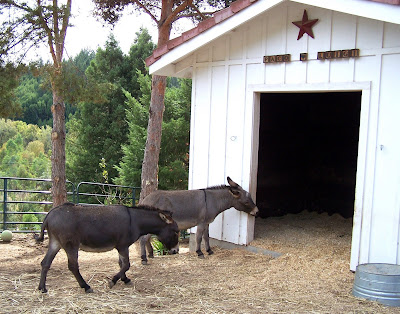 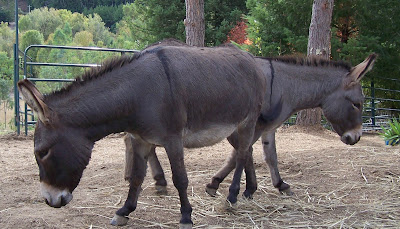 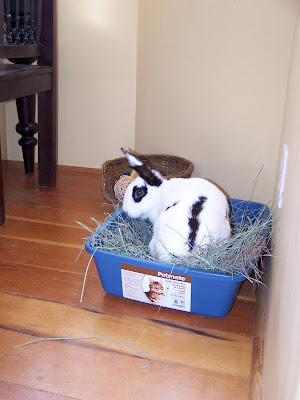 Wasabi in the kitchen. Despite being nervous, she still hopped up on her litterbox. 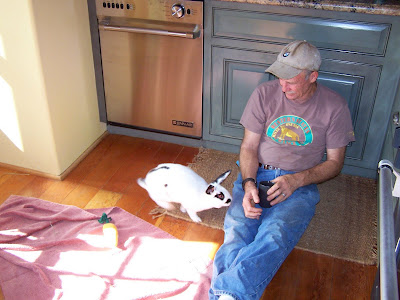 She is so bonded with the foreman that she does her thump when she hears his voice! I was upstairs with her when the foreman took a call on his cell phone outside. Wasabi heard his voice and THUMPED! And she did it again when he came inside later and talked to the dogs. 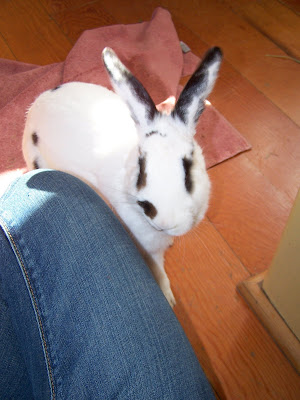 I think she looks like a ghost costume with uneven eyes and nose! 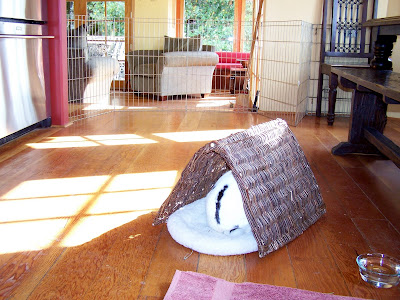 If you enlarge this photo, you can see one of the dogs peering through the door. 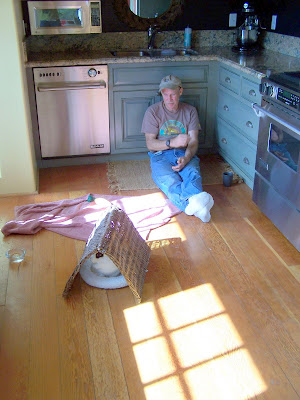 Since she was so brave with Boulder yesterday, I think we thought she'd be fearless in a new place- but we're going to have to take it slower.
Posted by Diana at 5:56 PM